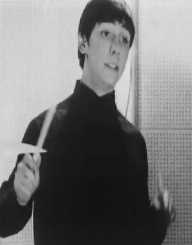 Peter Dennis Blandford Townshend aka Pete Townshend was born into a musical family on May 19, 1945. He was born at the Chiswick Hospital in West London to professional saxophonist Cliff Townshend and singer Betty nee Dennis Townshend. Owing to his parents' chronic alcoholism, short-tempered nature, and frequent quarrels, Pete was sent to his grandmother's place for a short while when he was a toddler.

After reuniting with his parents two years later, Pete Townshend got enrolled at the Acton County Grammar School, but his experiences in the school were far from being good. He was always bullied for having a big nose, and this bullying led him to become an isolated child having very few friends. In 1956, Pete's grandmother Emma gifted him his first guitar, an inexpensive Spanish model. The 1956 film 'Rock Around the Clock' left a deep impression on him and drew his attention towards American rock and roll music.

In 1961, Townshend decided to pursue graphic designing at Ealing Art College. Shortly after that, he co-founded the band 'The Confederates' with his schoolmate John Entwistle. However, due to a major fight with the group's drummer, Chris Sherwin, Pete left the band and subsequently dropped out of college in the year 1964. Then onwards, he started to pursue music as a full-time profession.

Pete Townshend joined the rock and roll band ‘The Detours’ as an additional guitarist. Roger Daltrey led the band as the lead guitarist and comprised of four other members viz. Drummer Doug Sandom, Vocalist Colin Dawson, Bassist John Entwistle and Pete Townshend as the Rhythm Guitarist. In 1962, vocalist Dawson quit the band and Daltrey went on to become the vocalist. Pete became the solo guitarist for the band. In 1963, Townshend wrote his first song ‘It Was You’ and with the help of his father got the song recorded. In 1964, The Detours band was renamed as ‘The Who.’

The Who’s first major hit came in January 1965 with the song ‘I Can't Explain.’ The song written by Townshend hit the number 8 spot on U.K. charts. Their first hit was followed up by another big hit single ‘Anyway, Anyhow, Anywhere.’ But it was The Who’s third single ‘My Generation’ that catapulted the band to achieve global fame and recognition and cemented their position as the rock legend band.

Pete Townshend continued to deliver hits in the form of many more self-penned songs like 'Pictures of Lily,' 'Substitute,' 'I'm a Jack' and 'Happy Boy.' On December 1966, The Who released their second album titled 'A Quick One' and the track 'Happy Jack' from the album topped the charts. Next in line came their concept album 'The Who Sell Out' which contained The Who's biggest US single 'I Can See for Miles.'

In the year 1968, Townshend became involved in spiritual activities. He became a devout follower of the Indian mystic Meher Baba. In the years that followed, Pete Townshend released a trio of devotional albums dedicated to the teachings of his spiritual guru - 'Happy Birthday' (1970), 'I Am' (1972) and 'With Love' (1975).

In the year 1973, Townshend decided to explore another genre and started writing songs for the rock opera. 'Quadrophenia' is Townshend's most remarkable work to date as it is The Who’s only album which was entirely written and produced by him.

The film version of the album 'Tommy' was premiered on 18th March 1975, and Pete Townshend bagged a nomination for the prestigious Academy Awards for creating the music for the film. In the same year, The Who released another blockbuster hit album 'The Who by Numbers.'

After doing several concert tours with his band, Pete Townshend took a short sabbatical from music in the year 1976 to focus more on his family. But the break ended within a year as he collaborated with bassist and another Meher Baba devotee Ronnie Lane for the album 'Rough Mix.' In 1978, The Who came out with the album 'Who Are You' which garnered huge response and became one of the major hits of The Who. It was the band's last work with drummer Keith Moon as he died just a few days later.

Pete Townshend was the primary songwriter and leader of The Who band which was considered as the best live band of that era by many rock critics. Along with contributing to the band, Townshend simultaneously kept his solo career active. After the death of Keith, in 1980, Pete released his solo album titled ‘Empty Glass’ which turned out to be highly successful. The English Musician was infamous for his onstage antics and habit of smashing guitars at the end of a performance.

Pete Townshend was honored with the ‘Lifetime Achievement Award’ in 1983 at the BRIT Awards ceremony.

In 1994, for his album ‘The Who’s Tommy,’ Townshend was conferred with the Grammy Award for the category ‘Best Musical Show Album.’

He is also the recipient of an honorary doctorate from the University of West London.

Pete Townshend knew Karen Astley, film composer Elwin Astley's daughter, from his art school. The two got married on 20th May 1968. They have three children together. The couple decided to part ways in 1994 and filed for divorce in 2009.

Townshend is an active supporter of drug rehabilitation and has carried out many charitable works. He is the founder of the Meher Baba Oceanic in London. He has also had a partial hearing loss. Townshend currently lives at The Wick, Richmond, England with his musician girlfriend, Rachel Fuller.