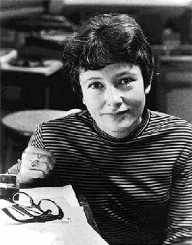 The poet Denise Levertov was born Priscilla Denise Levertov in Ilford, England on the 24 October 1923. Her father, Paul Levertov was born in Russia into a Hasidic Jewish family. He later converted to Christianity when studying in Germany and became an Anglican priest. He was also a Hasidic translator and scholar. Her mother was Welsh-born Beatrice Adelaide Spooner-Jones. At a young age, Levertov decided that she wanted to be a writer. She had two sisters, one of whom died young and Olga, her older sister.

Denise Levertov was homeschooled by her mother and had a sketchy formal education which ended when she was 12 years old. Her home life was culturally rich with her mother reading 19th-century literature to her children and educating them in the arts. Her upbringing turned Levertov into an autodidact who spent her life studying literature, languages and the arts.

Denise Levertov's first poem was published in Poetry Quarterly in 1940 when she was 17, and the literary establishments in both the United Kingdom and the United States became aware of the emerging poet. During World War II (1939-1945) Levertov served as a civilian nurse in war-torn London and was there during the Blitz of 1940-1941. Cresset Press published her first poetry collection, The Double Images (1946) in the UK.

In 1948, Denise Levertov relocated to the United States as the wife of Mitchell Goodman. Her husband had been studying on the G.I. Bill in Europe when they had met. They lived in New York, spending summers in Maine. Around this time, Levertov was exploring the poetry of the Transcendentalists including Emily Dickerson and Walt Whitman. Goodman was a friend of the poet Robert Creeley who was involved with the Black Mountain poets, a group experimenting with new forms through content.

Here and Now (1956) was her first poetry collection published in America. With Eyes in the Back of Our Heads (1959) followed. During the 1960s, Denise Levertov was influenced by feminism, civil rights, and the Vietnam War. Her poetry reflected her rejection of militarism.

During the 1960s, Levertov founded the Writers and Artists Protest Against the War In Vietnam along with Muriel Rukeyser and other poets. She also took part in anti-war demonstrations in Berkeley, California. She was the poetry editor of The Nation during the 1960s and poetry editor of Mother Jones in the 1970s. She also taught at Stanford University (1982-1994). Levertov published over twenty collections of poetry.

In 1995, Tesserae: Memories and Suppositions was published. The work contains twenty-seven autobiographical prose essays. Her final collection was published posthumously by New Directions: This Great Unknowing: Last Poems (1999). Her correspondence with William Carlos Williams was edited by Christopher MacGowan: The Letters of Denise Levertov and William Carlos Williams (1998). New Directions Publishing released The Collected Poems of Denise Levertov (2013) which covered six decades of her writing.

Denise Levertov received many awards including the Robert Frost Medal, the Lenore Marshall Prize, the 1996 Governor’s Writers Award from the Washington State Commission for the Humanities, a Catherine Luck Memorial Grant from the American National Institute of Arts and Letters.

Denise Levertov had one child with Mitchell Goodman, a son Nikolai. Denise Levertov died in Seattle, Washington on the 20 December 1997, aged 74. She had spent the final decade of her life living in Seatle.