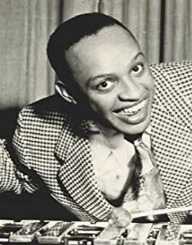 Jazz drummer Lionel Hampton was born on the 20 April 1909. His father Charles was killed in World War I (1914-1918). After the death of his father, Hampton’s mother relocated to Chicago.

Born into the Catholic faith,  Lionel Hampton was taught by nuns. He also studied musical theory at the University of Southern California.

As a boy living in Chicago, he joined a newsboys band instigated by the Chicago Defender. Encouraged by his uncle who bought him his first drum kit, he became proficient on drums and began to find work in various dance bands. By 1930 he was playing in a band supporting Louis Armstrong at the LA Cotton Club.

After a session in 1936 with Benny Goodman, Teddy Wilson and Gene Krupa, he began appearing on small-swing-band recordings. Influenced by Goodman’s style, Lionel Hampton started his orchestra in 1940 which included band members such as guitarist Wes Montgomery and singer Betty Carter. He found national success in 1942 when he had a hit with the swing anthem Flying Home.

He was popular at festivals and also worked in a group doing club work and continued to retain his popularity into the post-rock music ear.

Lionel Hampton married Gladys Riddle who was a dancer and together the couple built up a business empire. She also encouraged his drumming. Riddle died in 1971 and Hampton on the 20 April 1909.