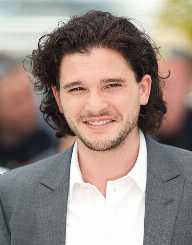 Kit Harington was born 26th December 1986, to Sir David Harington, 15th Baronet, and his wife, Deborah Catesby. His father is a businessman, his mother, a former playwright. He was born in Acton, London, England. He comes from noble ancestry, with his great-grandfather being Sir Richard Harington, 12th Baronet, and his lineage coming down through Charles II of England, his eighth great-grandfather.

Kit Harington attended Southfield Primary School until 1998. He then moved to Worcestershire with his family, and he studied at Chantry High School, graduating in 2003. He had become interested in acting by this time, and he had performed in school productions. Harington studied drama and theater at Worcester Sixth Form College for three years, until 2005.

In 2004, he moved back to London and enrolled 12 months later into the Central School of Speech and Drama. He graduated in 2008.

Kit Harington was still studying when he won his first theater role in 2008. It was the role of Albert in War Horse, a production by the National Theatre. The play ran over 2008 and 2009, by which time Harington had gained plenty of recognition.

His next role came in the 2010 production of Posh.

In 2011, Harington auditioned for the role of Jon Snow, in a television series called Game of Thrones. He won the role, and the show debuted in 2011. The show received great critical acclaim and is still running. The seventh season premiered in 2017, and the eighth season will be the final season, bringing all the subplots together, in a final ending for the show. Harington is earning two million pounds per episode in Game of Thrones, making him one of the highest paid actors on television.

Harington has only been in two other television shows apart from his main role. These are 7 Days in Hell (2015), a television movie, and Gunpowder (2017) which ran over three episodes. He has also done voices on the video game of Game of Thrones (2015), and Call of Duty: Infinite Warfare (2016).

Kit Harington has been nominated for more than 30 awards, and he has won ten of them. His wins include three Online Film & Television Association Awards and four Gold Derby TV Awards.

In 2018, Kit Harington married one of his co-stars from Games of Thrones, Rose Leslie.

2015 saw him team up with other stars such as Benedict Cumberbatch and Nicole Kidman, in a production of the Children’s Monologues. The performance supported the charity called Dramatic Need, which assists children in South Africa and Rwanda.

In 2016, he became the ambassador for Mencap, which is a UK based organization to help people with learning disabilities, as well as providing support for their families. Later in 2016, Kit Harington once again teamed up with other notable actors, including Cate Blanchett, Keira Knightley, and Stanley Tucci, amongst others, who filmed a documentary for the United Nations to raise awareness for the refugee crisis that was taking place around the world.

He is also active with other causes.