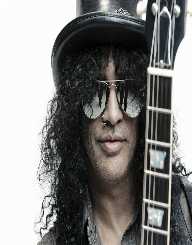 Slash was born on July 23, 1965. He is a British born American singer and guitarist. He began playing the guitar while he was a teenager. He is globally recognized as the lead guitar player of the band ‘Guns N’ Roses.’ While playing for the ‘Gun N’ Roses’ band, he achieved global success.

Slash founded ‘Slash’s Snakepit’ while he was still with the band. When he left the band, he co-founded another band by the name ‘Velvet Revolver.’ ‘Velvet Revolver’ re-established him as the mainstream performer globally. After founding ‘Velvet Revolver,’ he, later on, went on to pursue a solo career.

Saul Hudson, popularly known as Slash, was born on July 23, 1965, in London. He was born to Ola Hudson who was a costume designer and Anthony Hudson who was an English Artist. His mother was black while his father was white. He did not have a smooth childhood as his parents had separated and his family had significant issues. He was raised by his father who was an alcoholic.

The state of the type of life he lived made Slash grow up as a rebellious child, that is, he grew up a troubled child. He did not like school, but he loved music. He tried to form a band with his friend, Steven Adler but it failed. Slash practiced playing guitar for twelve hours a day to be perfect. He was also a biker, but he abandoned biking for his love of music.

In 1981, Slash joined his first band, ‘Tidus Sloan.’ In 1983, he and his friend Steven Adler formed the band ‘Road Crew’ but it was not a success. In 1985, they both joined the band ‘Gun N’ Roses.’ The band at the beginning played in nightclubs and opened for other bands that had already made it in the music industry.

In 1996, Slash left the band and went ahead to form the band ‘Velvet Revolver’ with Duff McKagan and Matt Sorum. The band made their debut with the album ‘Contraband’ which sold two million copies. The album also debuted at number one on the US Charts. The band got a lot of fame and success.

In 2008, Slash left the band to pursue a solo career. In 2010, he released his debut album ‘Slash.’ The album had hit songs such as ‘Nothing to Say,’ ‘Beautiful Dangerous’ and ‘Starlight’ among other songs. He became a successful performer in his solo career. In 2012, he released his second album ‘Apocalyptic Love’ which debuted number two on the Canadian Albums Chart. In 2016, Slash and Duff McKagan rejoined the band ‘Guns N’ Roses.’ Slash rejoined the band after 23 years of being separated from them. The band rejoined for the North American Tour.

In 2007, Slash received the title of ‘Riff Lord’ at the Metal Hammer’s 4th Annual Golden Gods Awards. In 2013, Loudwire readers presented him the award for ‘Best Guitarist of the Year 2012’. In 2015, he was awarded the Les Paul Award.

In 1992, Slash married model Renee Suran, but they divorced in 1997. In 2001, he married Perla Ferrar with whom he has two sons. The marriage ended in divorce in 2014. In 2001, Slash was diagnosed with a heart problem due to alcohol and drug abuse. He fought the disease, and now he is clean and sober. He has a net worth of $32 million.