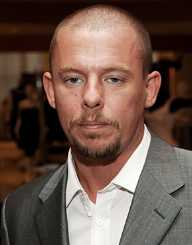 TURBULENCE AND TRANQUIL: The Strange Life of Alexander McQueen

Fashion Industry’s most sought-after name Alexander McQueen, fondly called ‘Lee,’ was born in a middle-class family on the 17th of March, 1969 in Lewisham, London. His parents came from a humble background; his father, Ronald being a cab driver while his mother, Joyce was a social science teacher. Ronald and Joyce lived with their six children in a terraced house in Stratford. McQueen was the youngest of the lot, and from a very young age, he displayed a deep interest in tailoring clothes by making dresses for his three elder sisters.

Alexander McQueen started his primary education at Carpenters Road Primary School and then took admission in Rokeby School. In 1985, when he was 16 years old, he dropped out of school. He got the opportunity to hone his tailoring skills when he landed an apprenticeship with the famous Savile Row tailors Anderson & Sheppard and then moved on to the neighboring Gieves & Hawkes. By this time, McQueen had realized that fashion was his calling and hence he decided to proceed further with his clothes-making career.

He became proficient with six methods of pattern cutting from the melodramatic 16th century when he began working for theatrical costumiers Angels and Bermans. It was during his apprenticeship period, McQueen mastered the art of razor-sharp tailoring and making impeccably tailored looks. This dramatic style of clothing earned him much fame and recognition in the fashion world and went on to become his signature style.

At the age of 20, Alexander McQueen spent some time working for designer Koji Tatsuno and later traveled to Milan, Italy where he served as the design assistant to renowned Italian fashion designer Romeo Gigli. After his brief stint at Milan, McQueen returned to London and enrolled himself at Central Saint Martins College of Art and Design.

Though initially, McQueen had applied to be the pattern cutter tutor at the institution; Bobby Hilson, the Head of the Master's course, was impressed seeing his strong portfolio and convinced McQueen to give his name as a student for the course. In 1992, McQueen earned his MA in Fashion Design. His prolific career in the fashion world began with the display of his graduation collection which caught the attention of influential fashion stylist Isabella Blow, and she bought the entire collection. McQueen found the friendship of a lifetime in Isabella Blow who also became an advocate for his work.

Post-graduation, the British designer shifted base to Hoxton and started his line of clothes for women. Alexander created a sensation with the introduction of ‘bumster pants.’ Though McQueen tasted enormous success with the low waist bumster trousers, they were also a point of debate. Soon after, he launched his second and third collections titled ‘McQueen's Theatre of Cruelty' and 'The Birds.’

Alexander McQueen’s very first clients were singer David Bowie and Icelandic singer Bjork. He designed the entire wardrobe for Bowie’s 1996-97 tour and was also the designer of the Union Jack coat that Bowie was seen wearing on the cover of his album ‘Earthling.’ In 1997, Icelandic singer Bjork approached McQueen for designing the cover of her album ‘Homogenic.’ He also directed Bjork’s song ‘Alarm Call’ from the same album.

Alexander McQueen reached the pinnacle of his career in 1996 when he succeeded John Galliano to become the Chief Designer of Louis Vuitton’s Givenchy. Though his first collection at Givenchy did not leave any impression, his designs and shows continued to be polemic. McQueen’s bold decision to include double amputee model Aimee Mullins walking down the runway on carved wooden legs caused a major controversy. His association with Givenchy was a tumultuous time as he believed that the organization held back his creativity.

The dawn of the new millennium opened up new avenues for McQueen as Gucci Group acquired a 51% share in McQueen’s private company and he became the Creative Director. He ended his term at Givenchy in March 2001. His collaboration with Gucci paved the way for more expansions in the form of stores in London, Milan and New York and with the release of his fragrances ‘Kingdom’ and ‘My Queen.’

Within ten years of starting his career in fashion, Alexander McQueen became one of the most respected fashion designers in the world. His fashion culture was an exciting blend of contrasting elements and earned him the titles ‘l'enfant terrible’ and ‘the hooligan of English fashion.’ He shocked and surprised his audiences with the highly controversial collection ‘The Highland Rape’ which established him as the quintessential bad boy of the fashion world.

His work displayed an amalgamation of bespoke British tailoring, the exquisite craftsmanship of French Haute couture atelier and Italian manufacturing’s flawless finish. Till date, McQueen’s 2001 Spring/Summer collection titled ‘VOSS’ is regarded as his best work as it displayed a perfect balance of technology and innovation. In 2005, McQueen teamed up with Puma to launch a special line of trainers. McQueen is also the mastermind behind ‘McQ,’ a lower-priced, younger line of clothes designed for men and women.

In 1996, Alexander McQueen won the "British Designer of the Year" award. In between 1996-2003 he won the award for three more times positioning him in the list of youngest designers ever to win the title.

He was also bestowed with the ‘Commander of the Most Excellent Order of the British Empire’ (CBE) award for his contribution in the fashion industry.

Alexander McQueen's personal life strongly impacted his sense of fashion. His overtly emotional nature, rebellious spirit, and raw energy are depicted in his works. At the age of 18, he went through a rocky phase when he declared about his homosexuality to his family. Gay designer, Alexander McQueen got married to documentary filmmaker George Forsyth in the year 2000. They were married for a year and then parted ways on a friendly note.

Lee McQueen was also a victim of child sexual abuse. He was also highly addicted to drugs. The suicide of close-friend Isabella Blow left McQueen shattered. On 11th February 2010, nine days after his mother’s demise, Alexander McQueen committed suicide by hanging himself. The iconoclastic designer’s death at a young age of 40 left the fashion world in a shock. The fashion icon’s legacy continues to live on through his fashion house ‘Alexander McQueen.’