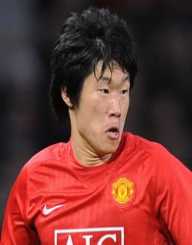 Ji-Sung began playing football in primary school. His talent quickly came to the notice of several clubs, and he was earmarked as one of the best young players in the country.

He attended high school from 1996 to 1999, and during that time his high school team won the national championships. Due to his small stature, Ji-Sung was rejected by several clubs and universities, but he stuck to his training with the encouragement of his coach, and he joined Myongii University as a player. In 1999, his university team was given the opportunity to train with the South Korean Olympics Team. He was soon noticed by the Olympic coach, and not long after, he was given a place in the Olympic squad.

In April 2000, Park Ji-Sung played in the national team for the AFC Asian Cup. In June of that year, he was offered a contract with the Japanese-based Kyoto Purple Sanga which he accepted. In September 2000, Ji-Sung participated in the Summer Olympics, but the South Koreans didn’t get past the knockout stage.

In 2001, the Purple Sanga won the J2 League title and advanced to the J1 League. In 2002, the team won the Emperor’s Cup for the first time in the club’s history. In 2003, Ji-Sung left Sanga and joined the Dutch club PSV Eindhoven. He was with the club until 2005, at which time he left to join Manchester United. He signed a contract worth four million pounds.

The club sent Park Ji-Sung to the U.S. in 2007 to have surgery on a knee injury that kept recurring. After missing the rest of the season, he returned for the 2008 year. He was included in the squad that played for the FIFA World Cup that year, which the club won. In September 2009, Ji-Sung signed a contract extension. He continued to play with Manchester, and in 2011 he returned to South Korea to captain the team in the 2011 Asian Cup.

He returned to Manchester after the tournament, but in 2012 he moved to the Queens Park Rangers. Unfortunately for Ji-Sung he hit a form slump and had to contend with injuries, so he made little impact at his new club. In 2013, he returned to PSV for the season. In May 2014, Ji-Sung announced his retirement, due to the recurring injury with his knee.

In 2016, Ji-Sung attended De Montford University, hopeful of becoming a coach in the K League.

Among his many honors and awards Park Ji-Sung has the following:

In 2014, Park Ji-Sung married Kim Min-Ji, a former television reporter. The couple had a daughter in 2015.

Ji-Sung has participated in various charity football events, as well as founding his foundation, JS Foundation. It is an organization that develops charity programs to support football infrastructure.