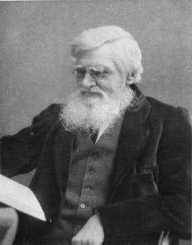 Alfred Russel Wallace's family had a rich heritage with the reputed Scottish warrior, William Wallace believed to be a forebear of their lineage. Alfred was born on 8th January 1823 in Welsh district of Llanbadoc. Though the family was regarded as a middle-class, they were just able to meet the necessities of life. Alfred Wallace began his education at high school level by attending a school with no tuition fees. He cut after passing a selection test but did not proceed further to attend college. His work in the early years began with working alongside his brother in a land surveying firm.

Alfred Russel Wallace's experience at the early stage also exposed him to the outdoors, and he loved the attraction of the wild. As his interest in the things of nature blossomed, Alfred started off on the habit of collecting insects of different species. His work outdoors was further boosted when explored the work of Charles Darwin, Carl Linnaeus as well as Alexander von Humboldt. The experience of these known names that had studied overseas territories and discovered new species was an exciting frontier for him.

Alfred journeyed to London to work with his brother and in the process; he studied on a self-taught basis at the London Mechanics Institute. His self-education was a routine of attending lectures and reading books.

By the time Alfred Russel Wallace turned 25, in the year 1848, he had voyaged to Brazil like his mentors alongside Henry Bates, who was a reputed naturalist. His intent when he traveled was to raise money from the specimen he collected by selling them to institutions and collectors in Britain. In four years, Russel worked in the Rio Negro area and made observations as well as collecting specimens and making entries about the language spoken by the natives. Russel put in six years to navigate the area and complete his compilation before returning to Britain.

The compilation Russel made in six years were lost when in the course of his voyage, there was a shipwreck occasioned by a fire outbreak. He lost his documentation about his exploration but was able to make a recovery from insurers since he insured his specimens, Alfred Russel Wallace turned to writing about his work, and he put these in two books as well as six academic papers. These entries were published in academic journals.


Turning To The East Indies

Alfred Russel Wallace began his new voyage to the Asian territories of Indonesia. Malaysia, Singapore, and Papua New Guinea by the time he turned 31. He was able to chronicle thousands of specimens on this voyage that uncovered new breeds of beetle. On his return to the UK, Alfred was able to return with more than hundred thousand species of various descriptions.

In his detailed descriptions, Alfred Russel Wallace noted that the short reef found between Lombok and Bali was indicative of huge animal life changes. This reef is the point where Australian wildlife meets with Asian wildlife. This point is now referred to as the Wallace Line.

Alfred Russel Wallace uncovered the theory of natural selection as a strand of evolution during his Asian voyage. He was documented to have communicated this finding to Charles Darwin in correspondence in June I858. The rash of opinion is that Darwin developed his idea of evolution from Wallace’s findings. Darwin’s data on the natural world was no doubt remarkable but to make it convincing and satisfactory, he worked with Wallace’s data. Sir Fred Hoyle was the one who came up with this observation although other historians do not share this sentiment. The lifelong friendship of Darwin and Wallace was noticeable, and many people have held on to the conclusion that Hoyle’s observation was not credible. Darwin’s theory is believed to have seen the light of day early as a result of Wallace’s findings. On that score, the work of Wallace is celebrated as groundbreaking although not given the acclaim attributed to Darwin.

The work of Alfred Russel Wallace that gave him the most acclaim was “the theory of evolution through natural selection.” It is attributed as one of the premieres works in the field of evolution. Alfred's findings on the geographical distribution of fauna are groundbreaking, and he is reputed for his biogeography works. His account of the expedition he carried out on the Malay region was published as “The Malay Archipelago” in the year 1869. The book was one of the most-referenced in the 19th century as far as scientific exploration was concerned. His other book, Wallace Effect, was deep in the theory of preventing hybridization by erecting barriers against this.

Wallace surmised that animals live better in the natural habit where they are found. In other words, the regions where they are found can also be defined regarding the animals that naturally occur there. The Kangaroos found in Australia are not found anywhere in Asia neither can elephants be seen in Australia naturally except for the tamed ones.
The awardsAlfred Russel Wallace received in his lifetime included the 1868 Royal Medal and Gold Medal from Société de Géographie in the year 1870. The Darwin Medal was awarded to him in 1890. The Founder’s Medal was awarded to him in 1892, and the list of awards continued till 1908 when he bagged the Order of Merit.

Alfred Russel Wallace got married to Annie Mitten in the year 1866. The union was blessed with William, Violet, and Herbert. His wife was the daughter of another scientist who excelled in the field of Mosses, William Mitten.