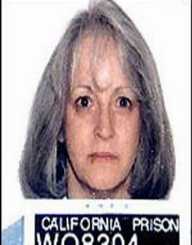 Convicted murderer Susan Atkins was born on the 7 May 1948 in San Gabriel, California to Edward and Jeanette Atkins. She had two brothers, Michael and Steven. Her mother died of cancer in 1963.

Susan Atkins was a pupil at Leigh School School as well as Los Banos High School.

After leaving home, Susan Atkins did various jobs to support herself including waitressing and telemarketing. Later, she spent three months in prisons and was put on probation. Atkins met Charles Manson in the Haight-Ashbury district of San Francisco in the summer of 1967. She was homeless; he invited her to join his group. Later that year, Atkins moved with Manson, and his followers to Los Angeles in a VW minibus and they survived living off the streets in Los Angeles and Topanga.

Around this time Atkins became pregnant. After a couple of girls from Manson’s group met Dennis Wilson of the Beach Boys, Manson and the girls moved in with Wilson for a while. The group then proceeded to Spahn Ranch in the San Fernando Valley in California. Spahn Ranch was a film set owned George Spahn.

The group supported themselves by drug dealing and theft with and were under surveillance by the local police about car theft. Manson was paranoid about biker members chasing after him about the death of a man named Bernard Crowe in a drug deal that went wrong. He pressurised members of the gang to come up with more funds, and one plan was to target an acquaintance of Manson who they believed had recently come into money.

Susan Atkins was one of Manson’s followers who approached Hinman on the 25 July 1969 and demanded money. The gang subsequently murdered Hinman. Their next crime was on the 9 August 1969. They killed Hollywood actress Sharon Tate and five others, including her unborn child. Atkins confessed at her trial to stabbing Tate repeatedly and writing the word pig on a door with Tate’s blood.

The following night, Mason and gang attacked and murdered a shopkeeper Leno La Bianca and his wife in Los Angeles. In mid-October 1969, the police arrested 27 people at Spahn Ranch on suspicion of car theft. In prison, Susan Atkins boasted about the killings to other inmates, and this led to a police breakthrough in the recent murders committed by the gang. By December, Atkins had agreed to a deal with prosecutors and negotiated a book contract. When her grand-jury testimony was published in the media, it made headlines.

After her arrest, Susan Atkins claimed that she was the person who stabbed Sharon Tate sixteen times. She also said that she believed Manson to be Jesus Christ incarnate. She later refuted her grand jury testimony. She was tried for first-degree murder relating to the Tate and LaBianca killings and found guilty.

Atkins was sentenced to death and remanded sent to the California Institute for Women. Later, the California Supreme Court overturned the death penalty as unconstitutional. Atkin’s sentence was commuted to life with the possibility of parole.

During the mid-1970s, Susan Atkins became a born-again Christian. She published an autobiography Child of Satan, Child of God (1977) detailing her religious conversion. She married Donald Laisure in 1981, but the marriage was annulled in 1982. In 1987, she married James Whitehouse, at the time a law student at Harvard University.

Her parole applications were repeatedly refused, and at one time she argued that she was a political prisoner. Her final parole hearing was in 2008 when she asked for a compassionate release because she was dying from brain cancer. This application was also refused.

In 1968, Susan Atkins had a son who was adopted out after her trial. Atkins was married twice in prison. Her first husband was serial husband Donald Lee Laisure who had been married over 30 times. (1981-1982). Her second husband was lawyer James Whitehouse (1987-2009). Susan Atkins died from a brain tumor on the 24 September 2009 in Chowchilla, Madera Country, California.