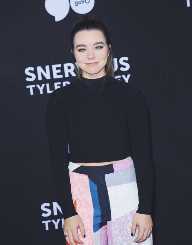 Born on September 24, 1993, Sierra Furtado is a rising social media maniac rocking on the prospects of YouTube to reach out to the world. The Canadian star currently has over 2.5 million subscribers on her channel. With millions of views, the rising star uses her channel to give tutorials on Do It Yourself (DIY)through video postings. Furtado has also ventured into acting and writing aside from using YouTubeto reach out to fans.

Her debut book, which is a young adult novel, Life Uploaded was released in 2016. She played the role of The Heiress in the YouTube Red series Escape the Night.

Sierra Furtado was born on September 24, 1993, in Montreal, Quebec to Angelo and Louise. She has two other siblings Amanda and his half-brother Corbin and is the second child of the three. Furtado’s father is a mechanic.

Her parents separated after her mother started an affair with a colleague worker. After spending some of her childhood life in Kelowna, she moved with her mother and elder sister to Vancouver, to live with her stepdad. While there, she was taken to a French Immersion preschool. Growing up, Furtado was interested in dancing and took part in school activities. After her high school education, Sierra Furtado enrolled at the Concordia University and lived in Downtown Montreal throughout her education at the university.

Sierra Furtado came to limelight with her YouTube DIY make-up video which has caught the attention of many. Her channel entails custom ideas and social advice among several others. She does all these in a hilarious way making the videos a fan to watch. She currently has over 2.5 million subscribers who she serves with frequent videos and daily vlogs on refreshing ideas.

The channel has become very popular and currently has over 120 million views. Sierra Furtado has also included video of places she visits and how interesting those places on her vlog. Her popularity gained her an invite from Joey Greceffa to feature in the YouTube Red Escape the Night. She subsequently accepted it leading to her debut acting role.

Aside from her social media career, Furtado has gone into writing and acting. Her first book Life Uploaded was released in 2016. In 2016, she was starred in YouTube Red series Escape the Night playing a role ofThe Heiress.

She also featured on 3 YouTuber React and Young Hollywood all in 2016. The cast of the series was awarded a Streamy Award for best ensemble cast in 2016.

Sierra Furtado entered into a relationship with fellow YouTuber Josh Tryhane who was also born in Vancouver. The lover broke up in 2015. She then found a new love Alex Terranova who is a Wilhelmina model same year. The two has been dating since.

Growing up, Sierra Furtado was gaga about the Jonas Brothers who she attended high school with. She also loves pets and had two cats, Teddy and Rocky.