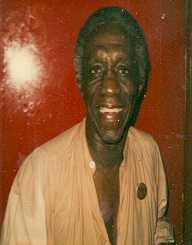 Arthur “Art” Blakey (later known as Abdullah Ibn Buhaina after converting to Muslim) was an American Jazz drummer and bandleader. Born on October 11, 1919, he was known for his extraordinary drum talent and work with bebop musicians including Dizzy Gillespie, Charlie Parker, and Thelonious Monk. This collaboration subsequently defined “hard bop” an offshoot of bebop. Blakey gained fame playing with the bands of Fletcher Henderson and Billy Eckstine in the 1940s. He formed the group Jazz Messengers in the mid-1950 alongside Horace Silver.

The band subsequently served as an incubator for young and dynamic talents like Wynton Marsalis, Wayne Shorter, Lee Morgan, Freddie Hubbard, and Benny Golson among others.

Arthur Blakey was born on October 11, 1919, in Pittsburgh, Pennsylvania. He was born to Bertram Thomas Blakey and a single mother MarieRoddicker who died after his birth.

A family friend, therefore, raised him and his other siblings. Blakey taught himself how to play the drums and received piano lessons in school.

During the start of his career, Blakey adopted the aggressive swing style of the likes of Chick Webb, Ray Bauduc and Sid Catlett. He became known as the inventor of modern bebop drumming alongside Max Roach and Kenny Clarke. According to some sources, Blakey started his music career while in the seventh grade.

Art Blakey started with the piano before switching to the drums. He played with Mary Lou Williams and toured with the Fletchers Henderson Orchestra from 1939 to 1944.

He later formed a band, which played at the Tic Toc Club in Boston. Blakey played with the Billy Eckstein’s big band from 1944 to 1947. Members of the group included Dizzy Gillespie, Miles Davis, Sarah Vaughan, Dexter Gordon, Charlie Parker, and Fats Navarro among others. It was during this period that he became associated with the bebop movement.

After the band disbanded, he traveled to Africa in 1947 and was expected to spend only three months but ended up spending two years.

On December 17, 1947, Art Blakey recorded for Blue Note Records with the group Art Blakey’s Messengers. He was the leader of the band with other members including Walter Bishop Jr., Kenney Dorham, Musa Kaleem, and Sahib Shihab. He later led the big band group called Seventeen Messengers, but the band broke up soon because of financial difficulties.

Horace Silver left the group with Mobley and Watkins. The group later became Art Blakey, and the Jazz Messenger and Blakey would be associated with it for the rest of his life. Several musicians briefly joined the group including saxophonist Johnny Griffin, Benny Golson, Wayne Shorter, Lee Morgan, Curtis Timmons, Jymie Merritt, Freddie Hubbard, and Cedar Walton among others.

All of them became great musicians in their own right. The group also became an incubator for several future great musicians like Terence Blanchard, Kenny Garrett, Johnny O’Neal, Donald Harrison, and Philip Harper among others.

Blakey had ten children. He converted to Islam during his visit to West Africa in 1948 and became known as Abdullah Ibn Buhaina. Blakey died of lung cancer on October 16, 1990, at age 71. He died at the St. Vincent’s Hospital and Medical Centre.

Art Blakey received several awards including Martin Luther King Humanitarian Award (1991) And Pittsburgh Jazz Festival Award. Berklee College of Music awarded him a doctorate of music in 1987 and received the Lee Morgan Memorial Award in 1982 among several others.