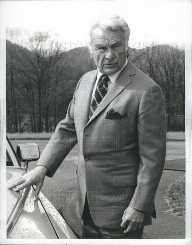 Actor Eddie Albert was born on the 22 April 1906 in Rock Island, Illinois. He was the eldest child of Julia Jones and Frank Heimberger. When he was still a young child, his realtor father moved the family to Minneapolis.

Eddie Albert graduated from Central High School in Minneapolis (1926) and then enrolled at the University of Minnesota where he did a degree in business studies. He also studied drama.

Upon leaving university, Eddie Albert started working in the business world, but this coincided with the stock market crash of 1929. Forced to look for work wherever he could find gainful employment, he worked as a trapeze artist, entertainer, and salesman. He also began to find work on radio and was co-host of The Honeymooners - Grace and Eddie Show. He soon found work on stage and appeared in Brother Rat (1936), Room Service (1937-1938) and The Boys From Syracuse (1938-1939).

He was exposed to television for the first time and became one of the earliest actors in the U.S. to work in the medium. His play, The Love Nest, specially written for television was broadcast in 1937. Eddie Albert appeared on Broadway in the musical The Boys from Syracuse (1938) and the same year made his film debut alongside Ronald Reagan and Jane Wyman in Brother Rat (1938). He went on to star in On Your Toes

In World War II  Eddie Albert was in the U.S. Coast Guard (1942-1943) and was then made a lieutenant in the U.S. Naval Reserve. He distinguished himself in a rescue operation and was awarded the Bronze Star

And in 1954, he started hosting a new show, Saturday Night Revue on NBC. He was often a guest star on various television shows.

As a committed environmentalist, Eddie Albert used his celebrity to speak out on various issues. In 1970, he was involved with the inaugural Earth Day.

In 1995, Eddie Albert was diagnosed with Alzheimer’s Disease.

Eddie Albert married Mexican entertainer Margo, and the couple had two children, Edward and Maria. His son, Edward Albert (1951-2006) was also an actor. Eddie Albert died on the 26 May 2005 in Los Angeles California.

Because of his wife, Maria had left-wing political views; she was branded a Communist during and put on a blacklist. Later Albert said in an interview that this made it hard for him to get work and had affected his career.