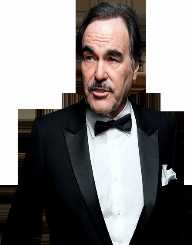 Oliver Stone was born on the 15 September 1946 in New York City. His father was Louis Stone and his mother, Jacqueline Goddet. Louis Stone was a successful stockbroker. Oliver Stone’s early upbringing was one of privilege, although later it was revealed that Louis Stone was deeply in debt. His parents divorced when he was twelve.
Growing up Oliver Stone sometimes spent time with his French grandmother in France.

Oliver Stone initially went to Trinity School in Manhattan and later to boarding school in ?Pottstown, Pennsylvania, graduating in 1964. Subsequently, he attended Yale University but dropped out. Stone then found a teaching job in Vietnam. This coincided with the Vietnam conflict. Stone joined the US Army and served with distinction in the 25th Infantry Division of the US in Vietnam. After returning from Vietnam, Stone attended New York University, graduating in 1971 with a Bachelor's degree in Fine Arts.

Oliver Stone studied filmmaking with Martin Scorsese, and it was at New York University he was first noticed when his short film Last Year in Viet Nam (1971) was greeted with enthusiasm.

After graduating from university in 1971, Stone had some jobs including working as a cabdriver and in sales. His made Seizure (1974) a low-budget horror film and then in 1978 wrote the screenplay for Midnight Express. Midnight Express was a success, winning five Academy Award nominations and paved the way for his future career.

Oliver Stone then worked on The Hand (1981), Conan The Barbarian (1982) Scarface (1983) and Year of the Dragon (1985). Salvador (1986) is about the politics of Central American. Stone was director as well as co-screenwriter. Photojournalist Richard Boyle was his co-screenwriter. Richard Boyle was played by actor James Wood in the film. Critics were positive about Salvador, but the film was not a box office success. Oliver Stone’s next Academy Award nomination was for Platoon (1986). This film is important because it was the first film which showed the Vietnam War through the eyes of someone who had actually fought in it. Platoon was subsequently banned in Vietnam.

Heaven and Earth (1993) a film focusing on the Vietnam war from the view point a Vietnamese woman, Le Ly Hayslip was followed by Natural Born Killers (1994). Natural Born Killers, which is about serial killers was controversial.
Nixon (1995) is a film about President Nixon and the Watergate scandal. Nixon won four Academy Award nominations and a Golden Globe nomination. In 1997 Stone directed a film U Turn (1997) but this did not garner much critical attention. Alexander (2004) was nominated for six Golden Raspberry nominations. World Trade Center (2006) a disaster film dealing with the events of 9/11 grossed $19,730,762 on its opening weekend in North America.
Street Never Sleeps (2008) is about the global financial crisis of 2008. Savages (2012) is a crime thriller based on a novel by Don Winslow.

Stone has directed some documentaries, including Looking for Fidel (2004), “W” about George W. Bush as President and a look at progressive Latin American leaders in South of the Border ( 2010).

Oliver Stone won his first Academy Award in 1978 for his screenplay, Midnight Express. Based on a book of the same title by Billy Hayes, Midnight Express was a harrowing crime-prison drama set in Istanbul. The film was considered overly violent and quite racist by some critics. In 2004, Stone apologised to the Turkish Government for the offense it had caused. (The Guardian Newspaper). In 1986 Stone won another Academy Award for the Vietnam era film, Platoon. Born On The Fourth of July (1989) also won an Academy Award. Nixon, about President Richard Dixon and the Watergate Scandal, received several Academy Award nominations, one Golden Globe nomination, and one Bafta nomination.

Many of Oliver Stone’s films have dealt with the dark side of life. War, violence, anger, and confrontation have been constant themes in his output. Stone has never been afraid to be controversial. Major works include his Vietnam films: Platoon (1986), Born on the 4th of July (1989) and Heaven and Earth (1993). These films raised public awareness about the Vietnam War. A war many in the USA were trying to forget. Nixon (1995) dealt with the Watergate Scandal and subsequent impeachment of President Richard Nixon.

He then married Elizabeth Burkit Cox in 1981, and they had two sons together. Sean Stone (1984) and Michael Jack (1991). The couple divorced in 1993 and Stone subsequently married Sun-Jung Jung. They have one child, a daughter Tara, born in 1995.

Stone had some involvement with Scientology and is also interested in Humanism.

Stone has a history of alcohol and drug issues including an addiction to cocaine which he overcame whilst working on the screenplay Scarface, a film which deals with cocaine drug lords. In 2005 Stone was arrested for being in possession of an undisclosed illegal drug.

Stone has made controversial remarks in relation to the Jewish population and media control in the USA. Stone has since withdrawn these remarks and apologised. Another controversial area has been statements he has made about the Ukraine and Russian politics.

Politically Stone leans to the left. He has a strong interest in Central and South American politics, voted for Obama and supported Bernie Sanders in the 2016 race for the Democratic Party presidential nomination.

Stone is a supporter of Julian Assange, the WikiLeaks founder.

The time that Oliver Stone spent in Vietnam left a strong impact on him and this shows in his work, mainly the Vietnam trilogy. Initially, he went there to teach, then later joined the US Army serving from 16 September 1967 until April 1968. Stone received some service medals and awards including the Bronze Star and the Purple Heart. He was wounded on two occasions.