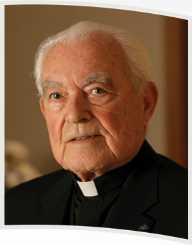 Th President of the University of Notre Dame

Theodore Hesburgh was born on May 25, 1917.  He was a priest of the Congregation of Holy Cross. He was also the President of Emeritus of the University of Notre Dame. He served as President for thirty five years. He pushed the University of Notre Dame to become the world’s best Catholic Institute in the modern world. He is among the most respected people in the Catholic Church. He worked with numerous United States Presidents, commissions, and foundations that helped people who were in need of help. He died on February 26, 2015.

Theodore Hesburgh was born on May 25, 1917, in Syracuse, New York. He was born to Anne Murphy and Theodore Bernard Hesburgh. He was brought up alongside four siblings, three sisters and a brother. In 1934, he was enrolled by his parents at Notre Dame. In 1937, he was sent to Italy by his seminary. In 1939, he graduated from Gregorian University with a Bachelor’s Degree in Philosophy. During World War II, he returned to Notre Dame where he was ordained as a priest of the Congregation of Holy Cross at Sacred Heart Church in 1943.

Theodore Hesburgh voluntarily rendered his services at the military chaplain but instead he was transferred to the Catholic University of America in Washington DC. In 1945, he received a Doctorate Degree in Sacred Theology from the University.

In 1957, Theodore Hesburgh was made a member of the United States Civil Rights Commission. In 1967, he was promoted to Chairman. He held the position of chairman for five years. In 1972, he was dismissed from the post by United State’s President Richard Nixon. In 1963, he was made the chairman of the International Federation Catholic Universities. He served as the chairman until 1970. In 1972, he introduced undergraduate coeducation in Notre Dame. Notre dame went ahead to become the first institution to admit female students to its baccalaureate programs. He held a firm stand during the Vietnam War and against campus protestors hence protecting the rights of other people.

Theodore Hesburgh served other posts apart from being the President of Notre Dame on government commissions, Vatican missions and non-profit organization boards. In 1974, he became a member of the Holy See’s United Nations Delegations. He was appointed as a member by Pope Paul VI. In the same year he was named to the Presidency Clemency Board. He also published ‘The Humane Imperative: A Challenge for the Year 2000’. In 1977, he was made the chairman of the Rockefeller Foundation. Two years later he was appointed as ambassador to the United Nations Conference on Science and Technology for Development. He also published his work titled ‘The Hesburgh Papers: Higher Values in Higher Education’.

Theodore Hesburgh also served as the chair of the Select Commission on Immigration and Refugee Policy. In 1983, he was appointed to the Pontifical Council for Culture by Pope John Paul II. In 1985, he created the Institute for International Peace Studies. In 1987, he stepped down from the position of president of Notre Dame. In 1990, he wrote his autobiography ‘God, Country, Notre Dame’. He co chaired the Knight Commission on Intercollegiate Athletics from 1990 to 1996. He was also on the Harvard Board of Overseers from 1994 to 1995.

In 1964, Theodore Hesburgh was conferred the Presidential Medal of Freedom by the then President Lyndon Johnson. In 1970 he was presented the Meikle John Award by the American Association of University Professors. In 1984, he received the Public Welfare Medal presented to him by the National Academy of Sciences. In 1999, he was awarded the Congressional Medal of Freedom. In 2004, he received the NCAA’s Gerald R. Ford Award for leadership in intercollegiate athletics. Two years later he received the Sachem Award which is India’s Highest Honour.  In 2013, he was honoured with the Honorary Navy Chaplain Title.

Theodore Hesburgh lived in Notre Dame Campus. The library in the University of Notre Dame was renamed after him in 1987. He died on February 26, 2015 at Notre Dame, Indiana. He died at the age of ninety seven.