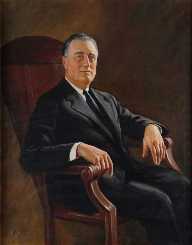 American politician and president Franklin D. Roosevelt was born on the 30 January 1882 in Hyde Park New York. He was the son of Sara Delano and James Roosevelt. He was homeschooled by his parents and private tutors during his early years.

In 1896 Franklin D. Roosevelt was sent to Groton, a preparatory school in Massachusetts (1896-1900). He then studied at Harvard and obtained a BA in history (1900-1903). Finally, he enrolled at Columbia University, New York and studied law. Roosevelt passed the bar examination in 1907.

After being called to the bar, Franklin D. Roosevelt practiced law with a New York law firm before entering politics in 1910. He was elected to the New York State Senate as a Democrat. Roosevelt won re-election to the State Senate in 1912. He was a supporter of Woodrow Wilson's candidacy at the Democratic National Convention. In 1913, Roosevelt was appointed Assistant Secretary of the U.S. Navy, and he held this position until 1920.
He showed himself to be an efficient and capable administrator. His success in this role led him to win a nomination for vice-president of the Democratic Party in 1920. The ticket was headed by Ohio politician James M. Cox. Warren Harding and the Republicans won the election and Roosevelt returned to private life.

Despite contracting polio in 1921, Roosevelt returned to politics. In 1923 he nominated Alfred E. Smith of New York for president at the Democratic National Convention. Smith lost to John W. Davis that year. When Smith became the Democratic candidate for president in 1928, he nominated Roosevelt to succeed him as governor of New York. Smith subsequently lost the election to Herbert Hoover. Roosevelt was elected governor of New York, winning a second term in 1930.

After winning his second term as governor of New York State, Franklin D. Roosevelt commenced his campaign for the position of president. In 1932 he was nominated as the Democratic Party’s presidential candidate and won an overwhelming election victory over Herbert Hoover of the Republican Party.

Franklin D. Roosevelt took office in 1934 in the middle of the Great Depression and immediately set about putting through legislation which set up agencies aimed at economic relief recovery and reform. This programme became known as The New Deal. In 1936, Roosevelt was re-elected to a second term as President. He won re-election again in 1940 and 1944.

When World War II began in 1939, although America was neutral, the country was against Nazi aggression. An amendment to the Neutrality Acts was necessary to allow the United States to provide aid and assistance to the Allies.  He also began to build up the armed forces although isolationists opposed this. When the Nazis invaded France in 1940, Congress enacted a draft for military service.

In March 1941 Franklin D. Roosevelt signed a bill which enabled the country to aid nations at war with Germany and Italy. American factories returned to pre-Depression industry levels to meet the demand for armaments. Then when Japanese attacked Pearl Harbour on the 7 December 1941, Germany and Italy, both declared war on the United States. President Roosevelt then actively exercised his powers as the Commander-in-Chief of the Armed Forces of the United States.

The US and allied forces invaded North Africa in November 1942, Sicily, Italy in 1943. The D-Day landings started on the beach of Normandy, France on the 6 June 1944. By 1945 the war was virtually over.

In 1921 while holidaying on Campobello Island in New Brunswick, Roosevelt contracted poliomyelitis and lost the use of his legs. His illness led him to establish a foundation to assist other polio victims. He was also heavily involved in the March of Dimes programme which funded a successful vaccine against polio.

In early 1944 Franklin D. Roosevelt fell ill and was diagnosed with heart and circulatory problems. A massive stroke led to his death.