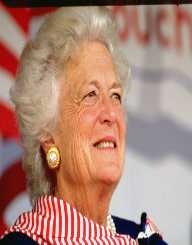 Barbara Bush was born Barbara Pierce on June 8, 1925, at Booth Memorial Hospital in Flushing, Queens, New York City. Her father Marvin Pierce was President of the McCall Corporation while her mother, Pauline Pierce served as the Chairperson of the Garden Club of America and was a committed conservation activist.

Barbara was raised in the suburban town of Rye, New York. She received her primary education attending Rye’s Milton Public School from 1931 to 1937 and Rye Country Day School from 1937 to 1940. She completed her graduation from Ashley Hall, a residential school in Charleston, South Carolina.

In 1941, Barbara Bush met George H.W. Bush, then a 17-year-old senior at Phillips Academy in Andover, Massachusetts, at a dance program. 16-year-old Barbara at that time was enjoying her Christmas Vacation in her home. Though they barely met in the next few years, the two developed a distant relationship by writing to each other very frequently. Meanwhile, George finished his high school and became the U.S. Navy’s youngest combat pilot. He narrowly escaped death when his fighter aircraft was hit during a bombing run in the Pacific at the height of World War II. Fortunately, he came back unscathed after completion of the World War II. Barbara and George H.W. Bush married on January 6, 1945.

They moved to New Haven, Connecticut, where George enrolled as a first-year student at Yale University. Their first child, George Walker Bush was born in 1946. George after having completed his graduation in 1948 shifted to Texas and California and entered the oil business. Their second child, a daughter, born three months after a tragic accident in which Barbara’s parents were killed, was named Pauline Robinson Bush, in memory of Barbara’s late mother. Tragedy and misfortune again struck them when in October 1953, Pauline, nicknamed Robin died of leukemia.

Eventually, Barbara Bush had four more children. Three of them were sons named Jeb, Neil and Marvin. Their last child was a daughter and was named Dorothy ‘Doro’ Bush in remembrance of George’s mother. Barbara Bush spent the next two decades attending the daily household chores, taking care of her husband and children. She devoted her spare time volunteering for organizations such as YMCA and United Way.

Barbara Bush helped her husband grow as a Republican Party politician by participating in his political campaigns. In 1966, Barbara’s husband was elected to Congress for the first time, and they moved to Washington D.C. the following year. As a wife of a congressman, Barbara involved herself with various charitable organizations and Republican women’s group in Washington D.C. Her husband unsuccessfully fought for the Senate in 1970 for the second time.

The then President Richard Nixon appointed George as the United States Ambassador to the United Nations. During George’s stint as ambassador, they moved into the New York City’s famous Waldorf-Astoria Hotel. There, Barbara Bush showed her social skill by forming relationships with prominent foreign dignitaries, entertaining them with diplomatic ease.

The Watergate scandal broke in 1973. Richard Nixon resigned in disgrace as a direct fallout of the scandal. Gerald Ford took the reins as President. There were several diplomatic posts on offer for George H.W. Bush to pick and choose from. He accepted the position of the Chief of the U.S. Liaison Office in the People’s Republic of China. Barbara Bush traveled to China and started picking up the entirely new cultural environment and the language.

Their stay in China did not last long as President Ford called back George to head the Central Intelligence Agency (CIA) reeling under the impact of Watergate and the Vietnam War. Barbara was opposed to her husband’s taking over the reins of CIA, as it could jeopardize George’s political career. George’s CIA tenure and their children studying in schools away from home made Barbara a patient of depression. She kept her composure and tried to understand the mental health issues with more compassion. She did not seek any medical care and kept her condition to herself. In 1979, George decided to run for the White House. Barbara Bush vigorously campaigned for her husband. Though George had to concede defeat, Ronald Reagan, his conqueror, chose George as his running mate for the Republican Party’s Vice-Presidential nominee.

In January 1981, George became the Vice-President of the USA under Ronald Reagan’s Presidency. Barbara Bush, as the wife of the Vice-President, enacted her role perfectly well. She traveled extensively around the world representing the United States interest.

SECOND LADY OF THE UNITED STATES

Barbara Bush was the Second Lady of USA for eight years beginning from 1980. In those eight years, she became quite popular and a household name among the U.S. citizens. She started working with various literacy organizations and took an active interest in literacy issues especially after her son Neil was diagnosed with Dyslexia.

In 1984, Barbara Bush wrote a book for her dog C. Fred and titled it ‘C. Fred’s Story’. All the money collected by selling this children’s book were donated to the cause of literacy charities. She gradually became conversant in speaking in public, promoting issues she believed in. Her self-deprecating wit and subtle sense of humor also won millions of hearts.

FIRST LADY OF THE UNITED STATES

At 91 years of age, Barbara Bush died on April 17, 2018. She has another distinction to her credit. Barbara Bush is the only woman besides Abigail Adams to be both a wife and a mother to a President of the United States.