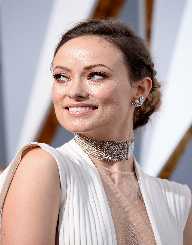 Olivia Wilde was born on March 10th, in 1984. Her place of birth was in New York City. She is a renowned American actress that has appeared in some hit films including The O.C., Tron: Legacy, Deadfall and Cowboys & Aliens. Part of her fame comes from the fact that she once got married to Tao Ruspolini who is the son of an Italian prince. She is also a humanitarian and a political activist.

Olivia Wilde was born on March 10th in 1984. At the time of her birth, she was given the name Olivia Jane Cockburn. Her mother Leslie Cockburn was also in the film industry as a producer. Both Leslie and his father Andrew are professional journalists. Right from the time Wilde was a child, she had the dream of one day becoming a famous actress. She was raised in Washington D.C. where she went to school at Georgetown Day School.

Olivia Wilde later went for her high school education at Phillips Academy located in Massachusetts. After graduating in 2002, she was to go to Bard College, but she opted to migrate to Los Angeles where she would strive to make her acting dreams come true. In 2003, she landed her first lead role in the movie industry. She was playing the role of Jewel Goldman in the TV series Skin-2003. She appeared in the TV series for six episodes. In spite of the fact that the movie series was short, it was a way of exposing her acting talents in the industry. After a year, she landed another role in the hit series The O.C.¬-2004.

With time Olivia Wilde landed roles in popular films which contributed to her rising recognition. In 2004 she featured in the romantic comedy The Girl Next Door. Two years later she starred in crime drama film called Alpha Dog-2006. During this time she was combining her film career with that of her TV career. In 2007 for example, she starred in the highly acclaimed medical drama called House. This was a TV series which was aired on Fox network for eight seasons.

Aside from playing attractive roles in both TV and film industry, Wilde attracted a large audience due to her beauty. This was also part of the main reason why producers chose for her to play lead roles in some movies. In 2009, her beautiful looks were recognized by the Maxim magazine put her on the top of the “Hot 100” list. Soon, her recurring role in the TV series House came to an end in 2012. The same year she acted alongside Chris Pine in the drama film People Like Us. The following year in 2013, she featured in Rush. This was a high budget film, and she starred with Chris Hemsworth.

In 2010, Wilder joined Artists for Peace and Justice. This was after the shocking earthquake hit Haiti causing a lot of property damage and killed thousands of people. The non-profit organization group that Wilde joined aimed to improve the lives of the people of Haiti. Two years later she featured in the documentary TV series Half the Sky. This show meant to bring to light the oppression that women went through in the society.

In 2003, Wilde got married to Tao Ruspoli, an Italian filmmaker. She was only 19 years old during her first marriage to him. After spending eight years in this marriage, she divorced Ruspoli and went on to date Jason Sudeikis. The pair had a son, Otis and a daughter named Daisy.