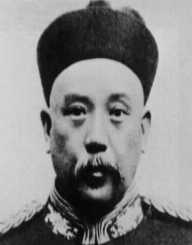 Yuan Shikai was a Chinese military leader turned politician. He later became the inaugural president of the Republic of China.

Yuan Shikai was born September 16, 1859, in Henan province in China. He was from a wealthy family with many members serving in the Chinese military. He was raised up by his paternal uncle. Shikai was educated in the classical Confucian education system, which was a reserve of the affluent. He was not academically gifted in class. He enjoyed the physical extra-curricular activities like boxing and horse riding.

Yuan wanted to become a civil servant like many in his family. He twice tried and failed the imperial entry exam to the civil service in 1876 and 1879. He decided to join the military. He served in the Huai Army, a unit that was more pro Westernization of China. In 1881, Shikai became the deputy commander of the army.

In 1882 the Korean empress asked the Qing to help her quell a coup in her empire. Shikai was sent to lead the Qing army. He successfully pacified the rebellion. He captured the Emperor’ father and brought him to Hebei Province in China. Li Hongzhang, the governor of Hebei Province appointed him his advisor on Korean affairs. Shikai was stationed in Korea. He facilitated the training of the new Korean military and oversaw the introduction of good governance. Shikai managed to help the Korean economy back to profitability. He earned the respect of the royal family, nobles and the commoners.

In 1884 Japan had some of its troops in Korea. The Japanese soldiers attempted to overthrow the Korean government by kidnapping Emperor Li Xi. Shikai led the Huai and Korean armies to defeat the imperial Japanese army in the ensuing war. He gained much praise from the Hebei governor Li Hongzhang.

In 1894 the Japanese army invaded Korea. Shikai returned to China after the Korean Emperor refused to seek help from China. The Qing government sent in the Huai army to Korea sparking off the first Sino-Japanese war. China was defeated by Japan. In 1898 Shikai was mandated to rebuild the Chinese army and reinstated Empress Dowager back to her throne. In 1900 the Chinese Boxers Revolution broke out in China. Part of the Chinese army mutinied calling for more reforms in China. Shikai managed to steer his army units out of the rebellion.

In 1901 Shikai became the governor of Hebei province. He served both as the army chief and governor until 1908. In 1908 Empress Dowager and her husband died within days. The regent rulers on behalf of the infant Emperor Puyi demoted Shikai and stripped him of all his administrative and military powers.

In 1913 Shikai organized national elections which were worn by the Nationalist Party. The majority party often opposed Shikai’s policies. In March 1913 the Nationalist Party’s chairman was murdered. A rebellion broke out against the government. Shikai pacified the uprising. In 1915 he entered into an agreement with Japan that angered most of the Chinese elite. On December 12, 1915, he declared himself the first emperor of the Hong Xian dynasty. He assumed the title The Great Emperor of China.

On March 22, 1916, Shikai abolished the Hong Xian dynasty and returned to republican governance. Once again Shikai became president. He faced mounting opposition to his presidency from both the politicians and former allies in the army. On June 6, 1916, Shikai died Xinhua. His body was interred in Henan Province on August 24, 1916.

Shikai attracted praises and criticism in equal measure. He became the great reformist that ended the imperial feudal system in China among other milestones. On the other hand, Shikai became a traitor after signing an agreement with Japan. China virtually became Japan’s slave after agreeing to the agreement.