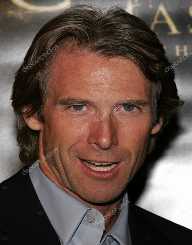 Michael Bay was born on February 17, 1965. He is an American film producer and director. He is known for directing and producing action movies. He started his career while he was in high school. The films that he has directed include ‘Armageddon’ and ‘Pearl Harbor’ among others. He is a co-founder of The Institute for the Development of Enhanced Perpetual Awareness. He is also a part owner of the digital effects house ‘Digital Domain’ and the production house ‘Platinum Dunes.’ Platinum Dunes has produced horror movies such as ‘The Hitcher’ and ‘Friday the 13th’ among other horror movies. He is a successful director and producer in the United States.

Michael Bay was born on February 17, 1965, in Los Angeles, California. He was an adopted child who was raised by his adoptive parents, Harriet, a child psychiatrist and Jim, a certified public accountant. He attended Crossroads School, in Santa Monica, California. Bay became in film directing after he interned with George Lucas where he filed the storyboards for ‘Raiders of the Lost Ark.’ After high school, he joined Wesleyan University where he majored in English and Film. He graduated in 1986. Ray did not stop at University, and he joined Art Center College of Design in Pasadena for his graduate work. In the college, he also studied film.

After finishing his post-graduate degree, Michael Bay started working at Propaganda Films. His work in the production company was to direct commercials and music videos. His 90 second World War II inspired Coca Cola advertisement was picked up by Capitol Records. He continued to work as a music video director for so many artists including Tina Turner, Lionel Richie and Wilson Phillips among others. In 1994, he directed the film ‘Bad Boys’ which was produced by Don Simpson and Jerry Bruckheimer. The film was a great success that it grossed $141 million at the Box Office.

Michael Bay has been honored with five MTV Awards for the films ‘Transformers’ best action sequel for ‘Pearl Harbor,’ ‘Bad Boys II’ and ‘The Rock.’ His commercials before he joined the film industry have also earned him awards such as The Grand Prix Clio and Cannes’ Golden Lion. In 1994, he received an award for Outstanding Directorial Achievement in Commercials from the Directors Guild of America. In 2009, he received the Vanguard Award for his excellence in filmmaking. In 2011, he was honored at the Transformers Hall of Fame for directing the Transformers action movies.

Michael Bay was adopted when he was just two weeks old. He lives in Los Angeles and Miami with his two bullmastiffs, Bonecrusher and Grace. He also had a dog named Mason who died in 2007.