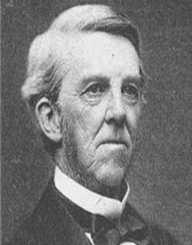 Oliver Wendell Holmes was born 29th August 1809, to Abiel and Sarah Holmes. He was born in Cambridge, Massachusetts, in the United States. His father was a minister for the First Congregational Church, and he also loved history.

Holmes was sickly as a child, and small in stature, but was very mature for his young years. He loved his father’s library and would spend a lot of his time exploring the different books there, although many of them were theological.

Among his father’s collection were works from poets like Alexander Pope and John Dryden, and Holmes was influenced by them, writing his first poem at the age of 13.

Oliver Wendell Holmes studied at Phillips Academy in Massachusetts, a school chosen by his father for its Calvinist teachings. His father hoped that Holmes would also become a minister. Unfortunately, Holmes had no interest in the ministry and did not enjoy his time at the Academy.

One of his teachers noticed his talent for poetry and recommended he pursue it. Soon after, Holmes was accepted into Harvard College.One of the other students that he befriended was Charles Chauncy Emerson, brother of Ralph Waldo Emerson.

Oliver Wendell Holmes did very well with languages and studied French, Italian and Spanish. In his second year, he was one of 20 students to be awarded the honor Deturs, and his prize was a copy of The Poems of James Graham, John Logan, and William Falconer. Holmes also studied medicine, law, and writing.

1830 was the year Oliver Wendell Holmes started writing his poetry. He wrote more than 50 poems during the year, and four of them would become some of his best known, including, The Dorchester Giant, Evening By a Tailor, Reflections of a Proud Pedestrian, and The Height of the Ridiculous.

During 1830, he moved to Boston to study at the medical college in Boston. As well as his study, he worked part-time as a chemist. Holmes wasn’t happy with some of the primitive practices of the era, but he learned under an excellent physician.

He continued to write, penning two essays which would be published in November 1931, and February 1932. These two would become some of his most famous work.

In 1833, Oliver Wendell Holmes moved to Paris to continue with his medical studies. There had been medical breakthroughs in the French hospital system that were considered very advanced for the period, so Holmes became one of the first Americans to be trained in the new method.

When Holmes returned to the U.S., he was one of the first to follow the methodeexpectante, the new method he had learned in France. He received his degree as a Doctor of Medicine from Harvard in 1836.

His first collection of poems was published later that same year, but Holmes had decided to pursue a career in medicine.

Oliver Wendell Holmes joined the Massachusetts Medical Society, the Boston Medical Society, and the Boston Society for Medical Improvement. The latter was a group of Paris-trained doctors like Holmes himself. He soon became ensconced in the medical scene and established his reputation.

In 1837, Holmes took up a role at the Boston Dispensary. He also wrote essays and won the Boylston essay prizes. He began to move into research and teaching, which was what he wanted to concentrate on and set up the Tremont Medical School with three of his friends.

In addition to teaching, for the next ten years, he also ran a small medical practice.

From 1838 to 1840, he was appointed Professor of Anatomy and Physiology at the Dartmouth Medical School.

After resigning from the position, Oliver Wendell Holmes wrote several lectures to expose what he considered to be medical fallacies, such as homeopathy.

In 1843, Holmes published his findings on The Contagiousness of Peurperal Fever. Although at the time he was attacked for his thoughts, Holmes persevered, and in modern times his work is now considered a landmark in the germ theory of disease.

In 1846, Holmes invented the word, anesthesia. This is, of course, is the word still used today in modern medicine.

In 1847, Oliver Wendell Holmes was appointed Parkman Professor of Anatomy and Physiology at Harvard Medical School. He served as dean until 1853 and continued to teach until 1882. Holmes came under fire when he allowed a woman to study at the school. Unfortunately, due to the opposition from staff and male students, she had to withdraw from her studies, and it was nearly 100 years before the first female student was accepted at the school.

After his wife came into money, Oliver Wendell Holmes purchased a summer home in The Berkshires in 1849. The family kept the house until 1856, spending summers there, during which time Holmes was able to socialize with other writers. They sold the home in 1856 as it was too expensive to maintain.

Once again Oliver Wendell Holmes caused controversy by allowing three black men to register at the medical school. They, too, eventually had to withdraw from their studies due to the opposition from staff and students.

In 1861, during the Civil War, Holmes started publishing pieces on the war. His oldest son, Oliver Wendell Holmes Jr., had enlisted into the Army.

His fame continued into the latter part of his life. Holmes published The Poet at the Breakfast-Table in 1872. He continued to publish, and in 1882, he retired from teaching. He was appointed Professor Emeritus.

In 1884, Oliver Wendell Holmes published a biography on the life and works of Ralph Waldo Emerson, who had been a good friend over many years.

After his youngest son died, Holmes went into mourning and began to postpone social engagements and stopped writing. In late 1884, Holmes undertook a visit to Europe with his daughter Amelia.

Oliver Wendell Holmes visited Great Britain where he met with several famous writers, and he then went to Paris where he met with Louis Pasteur, who had saved the lives of many women with his studies on puerperal fever, which was very pleasing for Holmes.

1838: Elected a Fellow of the American Academy of Arts and Sciences

In 1840, Oliver Wendell Holmes married Amelia Lee Jackson. Her father was an Associate Justice of the Massachusetts Supreme Judicial Court. The couple had three children – two sons and a daughter. Most of his family and friends died before he did, and he continued to write which was where he found comfort.

Oliver Wendell Holmes died in his sleep on 7th October 1894.

Oliver Wendell Holmes was well respected and liked by his peers. His essay on puerperal fever, although criticized at the time, was acknowledged as one of the most important contributions to medicine at the time.

Many of his papers, essays, and poems are in the library at the Phillips Academy in Andover where Holmes studied.

Oliver Wendell Holmes had a long life and wrote for most of his years. He penned poetry, essays, books, and other papers, while studying and practicing medicine, many of which became very well-known, and gave him an international following.