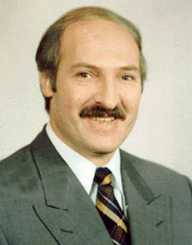 Alexander Lukashenko was the first president of the country Belarus.  His leadership has been scrutinized as a dictatorship.

Alexander Lukashenko was born on August 30, 1954, in Kopys, Belarus, Soviet Union.  His parents never married, so his father was rarely around as he grew up.

This affected him socially with his peers in school.   He was athletic training for cross-country races.  He also enjoys skiing and ice hockey.

Alexander Lukashenko was very familiar in the ideology of Vladimir Lenin and dedicated himself to it.  He initially wanted to be a political teacher, so he attended Mogilev Pedagogical Institute.

Alexander Lukashenko graduated in 1975.  Later he graduated from the Belarusian Agricultural Academy in 1985.

From 1977 to 1978, he was the secretary of the Komsomol committee of the food trade department of Mogilev.  During this time, he was also the leader of the All-Union Leninist Young Communist League chapter.

Then he was made the executive secretary of the Znaniye Association of Shklov.  From that time on, he was a member of a state-owned agricultural farm to help make ends meet for his family.  All of his hard work managing a construction materials plant and farm complex demonstrated his work ethics.

In 1990, Alexander Lukashenko was elected deputy to the Supreme Soviet of the Republic of Belarus.  As a member of parliament, he was the chairman of one of the anti-corruption committees.

Alexander Lukashenko was the only deputy in the parliament to vote against the dissolution of the Soviet Union and the establishment of the Commonwealth of Independent States in 1991.  Lukashenko ran for election after the fall of the Soviet Union.  He won in a second-round vote and was elected President of Belarus in 1994.

Alexander Lukashenko was able to maintain strict authority during the early transitional years.  In 1996, he was about to be impeached for violating the Constitution.  His referendum allowed him to have more power based on the amended constitution.

Alexander Lukashenko established a new parliament after the referendum which included members who were loyal to him.  The impeachment petition was dismissed, but many countries do not recognize the current constitution and parliament.

Alexander Lukashenko has served as president for four terms, each time with a majority of over 75% of the votes in each election.  Initially, he was supposed to serve a limit of two terms, but he held a referendum in 2004 eliminating term limits.

Alexander Lukashenko married Galina Zhelnerovich in 1975.  The couple has two children, but Lukashenko is suspected to have a son from an outside relationship.  Both he and Galina are married, but they have lived separately since his presidency.

Despite his authoritarian style, Lukashenko has been able to bring Belarus away from its union to the Soviet state to a European power.  His efforts have gone beyond the capabilities of other post-Soviet countries.

What makes Alexander Lukashenko stand out as a leader is his authoritarian style of leadership.  He had been known to persecute those who spoke out against his government.

The United States and the European Union have imposed sanctions on Belarus for human rights violations since 2006.  Also, he does not hold back on his opinions of people who are gay or lesbian.  The same is true for Jews.