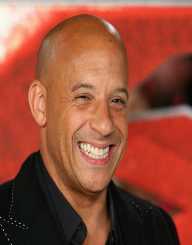 American actor, screenwriter, and director Vin Diesel was born Mark Sinclair on the 18 July 1967. He has a twin brother Paul. The twins' mother Delora Sherleen Vincent was a single mother and Sinclair has had no contact with his biological father. He was brought by his mother and her African-American husband partner, Irving H Vincent who was involved in the acting business as a theatre manager and acting tutor.

He was a student at Hunter College in New York City.

Vin Diesel's first stage appearance was as a child in Dinosaur Door produced at Theater for the New City in Greenwich Village, NY. His interest in acting continued throughout his youth.

In 1990 Vin Diesel starred in Awakenings (1990). He then wrote and starred in Multi-Facial (1994) about the problems a multi-racial actor may encounter auditioning. His second film Strays (1997) was about a gang leader. Steven Spielberg was impressed with his work and arranged for him to appear in Saving Private Ryan (1998).

The Fast and The Furious

The series has spawned video games, short films, music soundtracks and other products in the franchise.

The Chronicles of Riddick

This is a science fiction action media franchise. So far there have been three films including a DVD animated film, video games, and a mobile game. These include  Pitch Black: Slam City (2000), The Chronicles of Riddick: Dark Fury (2004) and Riddick: Blindsided (2013).

Vin Diesel is a Roman Catholic.

Video games are one of his passions, and one of his favourite games is Dungeons & Dragons.

Vin Diesel is known as a generous donor to various charities including the Paul Walker Foundation and the Steve Aoki Charitable Fund.