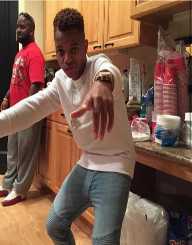 Born on November 23, 1999, Niqoles Heard best known as Lil Niqo is an American rapper who rose to fame with the music video, Television Love. Starting with his rap game at age seven, Niqoles Heard has worked assiduously to rise to fame within a short period in his career. Niqoles Heard made a rap debut with the single Ok, which Niqoles Heard did in collaboration with DJ Khaled. Niqoles Heard style of rap has gained him lot of love and fans among the youth. Niqoles Heard is signed to the Def Jam Records company making him one of the youngest to be signed on the label. Some of his famous videos are ‘On the Spot Interviews,’ 2011, ‘DGK: Parental Advisory,’ 2012 and the ‘Rap Game’ in 2016.

Niqoles Heard was born on November 23, 1999, in San Diego, California, the United States where he was raised. Much is not known about his childhood life and family background, but it is known that his interest in music started from childhood. At the age of seven, he had already shown his musical talent, and his parents did him well by giving them their support. His started performing at high school and soon started outdoor performances in clubs and community. This gained him lots of fans and his rap prowess resonated among the people. Kevin Wales of Worldwide Entertainment soon noticed his talent urging him on to concentrate on his musical career. Six months later, he was signed by L.A Reids of Def Jam Records.

Niqoles Heard Coined the nickname Lil Niqo to launch his musical career. Being talented, he did not find it difficult gaining enough support for amusical career. He, therefore, made his debut in 2011 just around age 12 with the single, “Ok, Then.” This was a collaborative effort between him and DJ Khaled. A contract with Def Jam Records followed making him one of the youngest artists of the record label.

Niqoles Heard had the opportunity to perform at The Youngster Cypher organized by the Black Entertainment Television (BET) in 2012. His next single was I Know, accompanied with a video in 2016 and that propelled him to higher pedestal gaining lots of love and fans. Though young, his rap skills speak for itself and keeping up on how he has started will surely make the heavens his starting point. As it is now, social media has become the best platform to generate the need fans, and Lil Niqo has done just that. He has a strong presence on Instagram with more than 566,000 followers and Twitter with 60,600 followers and has a fan base on Facebook. He does lots of postings on his social media platforms, and that has also increased his popularity.