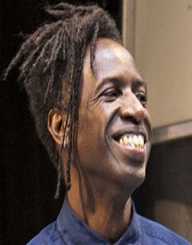 Rap artist Saul Williams has been making music. At the same time, he has used his talents as a poet, actor, and author.

Saul Williams was born on February 29, 1972, in Newburgh, New York. His father was a Baptist preacher. His mother was a teacher.

Saul Williams got his start to fame for his poetry. In 1996, he won the “Grand Slam Championship” at the Nuyorican Poets Cafe.

His acting, however, put him into a larger spotlight. While he had a few roles in some films, it was when he was the lead actor in the 1998 film Slam.

At the same time that Slam was released, Saul Williams was also working as an artist with others such as Christian Alvarez, Erykah Badu, Blackalicious, and Sonia Sanchez of the Black Arts Movement.  Saul Williams released his LP in 2001. Amethyst Rock Star was his first studio album in the genre of experimental hip-hop. It received mixed reviews from critics. He released Saul Williams in 2004 with greater success. Saul Williams toured with other groups and reached a broader audience.  He went on the 2005 European tour with Nine Inch Nails and performed at Lollapalooza. He also collaborated with Nine Inch Nail's Trent Reznor on his 2007 album The Inevitable Rise and Liberation of NiggyTardust!.

At first, the album was only available via the Internet as a digital download. Willilams appeared in Nine Inch Nail's Year Zero album that criticized contemporary U.S. Politics. Along with releasing albums, touring the world, and acting in various television, film, and theater roles, Williams continues to write and publish poetry.  The vocal reading of NGH WHT – The Dead Emcee Scrolls with the Arditti Quartet was released in 2009.  The Arditti String Quartet conducted by Thomas Kessler is also on the album.

Saul Williams had a relationship with artist Marcia Jones. They had a daughter. Williams married Persia White in 2008. The couple divorced after a year together.

Saul Williams is a critic of the War on Terrorism, in particular, the wars in Iraq and Afghanistan. He also signed the Occupy Movement to take a stand against social and economic inequality.

For his portrayal of a young poet, he was nominated for the Best Debut Performance for the Independent Spirit Award and won the Breakthrough Award from Gotham Awards.