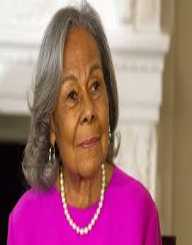 Civil Rights Activist Rachel Robinson was born as Rachel Annetta Isum on July 19, 1922, in Los Angeles, California, the United States of America to her parents Zelle and Charles Raymond Isum. She attended Manual Art High School and graduated from there in 1940. She earned her Bachelor’s degree in nursing from the University of California, Los Angeles (UCLA) in 1945. She further pursued her nursing education and obtained a Master’s degree in psychiatric nursing from New York University in 1959.

Upon securing her Master’s degree in psychiatric nursing, Rachel Robinson began working as a clinician-cum-researcher at the Albert Einstein College of Medicine's Department of Social and Community Psychiatry. She served there for five years and joined the Yale School of Nursing as Assistant professor after that. She became the Director of Nursing at the Connecticut Medical Health Center afterwards.

Rachel married baseball legend Jackie Robinson on February 10, 1946, after having met him during the early 1940s. They faced a barrage of racial abuse including death threats during Jackie’s early career in the major league. They both joined hands in involving themselves in active civil rights movement. However, tragedy struck Rachel when her husband died due to heart attack and some complications from diabetes in 1972 immediately after the death of their oldest son in a car crash in the previous year. Her mother also passed away in 1973.

In spite of so much grief and emotional turmoil, Rachel Robinson did not lose her strength. With firm determination, she established a real estate development company dedicated to provide affordable housing to the people of low and medium income group immediately after her husband’s death and name the company Jackie Robinson Development Corporation. She served the company as its President for the next ten years.

In 1973, she set up the Jackie Robinson Foundation, a non-profit organization, meant to help support minority students by providing scholarships for further studies and mentoring numerous students, mainly colored ones, in their further progress. Both of her efforts were successful enough as Jackie Robinson Development Corporation built and managed around 1300 housing units and Jackie Robinson Foundation maintained almost 100% rate of graduation with about 1500 alumni in its fourth decade of existence.

During the 1960s, well before the unfortunate demise of both junior and senior Jackie Robinson, Rachel Robinson and Jackie were quite active in the civil rights movement. They organized a jazz concert in 1963 so that the proceeds of the shows could be utilized in providing the bail money for the student protesters under detention in Birmingham. The concert was attended by Martin Luther King, Jr., and was held every year after that until 2002.

Rachel Robinson tirelessly worked to recognize and enhance the image of her husband, Jackie Robinson. She authored a book on him in 1996 titled Jackie Robinson: “An Intimate Portrait,” which was published by Abrams Publishing Company. She initially resisted any efforts to make any films on the life story of Jackie Robinson. However, she relented later and gave her valuable feedback and opinion when in 2013 a biopic was made on Jackie Robinson. She reviewed the script and met the lead actor of the Jackie Robinson biopic directed and produced by Legendary Pictures and Warner Brother’s Studio.

She was honored with numerous awards due to her achievement in public life. In 2009, she received the highest honor of the UCLA, the UCLA Medal for her lifetime achievements. The National Coalition of 100 Black Women conferred the Candace Award to her for her distinguished service. She was bestowed with twelve honorary doctorates in addition to her numerous other awards.

Rachel Robinson and Jackie were blessed with three children. The oldest among them died in a car accident in 1971. Her husband also passed away in 1972. Presently, Rachel lives on a farm in Salem, Connecticut. She has two children, Sharon, and David Robinson along with a battalion of fifteen grandchildren.