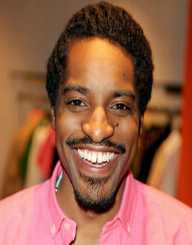 Andre 3000 is famous for being one half of the rapper duo OutKast. He is one of the top 10 rappers of all time. He is also an actor and a songwriter.

Andre Lauren Benjamin, known professionally as Andre 3000, was born on May 27, 1975, in Atlanta, Georgia. His parents had separated, and so he was raised by his single mom.

Andre went to Willis A. Sutton Middle School, and then Tri Cities High School, where he met, rival rapper and then lifelong friend Antwan Patton, also known as Big Boi.
They realized that together they could make a mark, and formed 2 Shades Deep.

As Andre grew older, his rebellious nature increased. Fortunately he directed all of this into his singing and rapping. Together with Patton, he performed at Shopping malls, and Parking lots.

Soon they came into contact with L.A.Reid who was not impressed by their current material. They met him again, with new work, and Reid gave them a contract.

They changed their name to OutKast, and their first album was

Southernplayalisticadillacmuzik, which came out in 1994. The album reached #20 on Billboard Charts, and claimed the #2 spot on American R&B Charts.Prior to that, their 1993 single ‘Player’s Ball’ reached the #1 spot in the rap category and stayed there for six weeks.

This gave him the much needed recognition and a wider audience that propelled his career into further fame and money. OutKast continued to release several successful albums including ATlines in 1996, Aquemini in 1998, Stankovia in 2000, Big Boi & Dre in 2001, and The Speakerboxxx in 2003.

The song ‘Hey Ya!’ from The Love Below, received critical acclaim and is their most famous song till date. It was also included in the Rolling Stones top 500 songs of all time.
Their album The Love Below also reached the #1 spot on the Billboard charts.

With his music career on the rise, Andre, also forayed into acting.  In his short film career, he appeared in films like Semi-pro and four brothers.

In 2003, he appeared in a film named Hollywood Homicide. 2013 saw him play the role of Jimi Hendrix in the movie Jimi: All Is By My Side. The movie received a lot of praised from both views and critics alike.

In 1998, Andre and Patton faced a lawsuit against them for their song titled “Rosa Parks”, by Rosa Parks herself. The lawsuit was later dismissed. The only thing it did, was add to the popularity of the OutKast.

Andre has received several awards and nominations in his career. He is the recipient of six Grammy awards. It includes the Grammy award for the Album of the year, for The Love Below.

Andre has a son named Seven from singer, Erykah Badu. His son was born on Nov 18, 1997. Soon after this, the couple separated.

Andre gave up on smoking and drinking. He was a vegan till 2014.