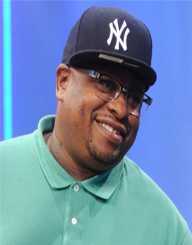 Texas-based hip-hop artist and rapper Scarface was born as Brad Terrence Jordan on November 9, 1970. He grew up in the South Acres neighbourhood of Houston, Texas. He gained his primary education from the Woodson Middle School and was raised in a Christian family. Scarface, however, converted to Islam in the year 2006.

Scarface developed an interest in music during his childhood days itself. He started off his career by producing songs for a local label in Houston known as 'Short Stop Records.' American Rapper Lil' Troy owned the label. Brad used to do his work under the pseudonym 'DJ Akshen.' He changed his pseudonym to 'Scarface' after getting inspired by the 1983 Al Pacino movie of the same name.

Scarface was a budding rapper, and in 1989 he recorded a track produced by Def Jam Blaster and Bruce 'Grim' Rhodes. The track was a single titled 'Scarface/Another Head put to rest.' Soon after the song was released, Scarface inked a deal with 'Rap-A-Lot Records.' At the same time, he became part of the rap group 'Geto Boys' comprising of other rap artists like Bushwick Bill and Willie D. His first work with Geto Boys was an album titled 'Grip It! On That Other Level' which was released in the year 1989. Though the album was not aired on television and radio due to violent lyrics, it managed to catch the attention of the public and became a huge hit.

In 1991, Scarface embarked on a solo career with the release of his solo album 'Mr. Scarface is Back'. He tasted success with his solo attempt as well. Within a short span of time, Scarface became the most known and celebrated face of 'Geto Boys.' His fame often overshadowed other members of the band. In 1992, Scarface lent his voice to Kool G Rap & DJ Polo's studio album 'Live and Let Live.' For this project, he joined hands with Ice Cube and Bushwick Bill. His second album 'The World is Yours' came in the following year and did moderately well. It failed to create an impact like his debut album.

In between the years 1994-1998, Scarface released his three major works - 'The Diary,' 'Untouchable' and 'My Homies.' All the three albums were blockbusters achieving the top spots at the 'Billboard' charts. Scarface also contributed music for the 1999 movie 'Office Space.'

In 2000, Scarface released the album 'The Last of a Dying Breed' which achieved critical acclaim worldwide. In the same year, he took over the position of the President of Def Jam Recordings southern branch. As the head of the label, it was he who was responsible for kickstarting the career of American Rapper Ludacris. In 2002, the famous rapper came out with the sequel of the album The Last of a Dying Breed named 'The Fix.' In the same year, he again released a 'Geto Boys' record titled 'The Foundation.' Simultaneously, the eminent hip hop artist joined forces with famous singers Akon and Big Gee. The collaboration was done for producing a posthumous album of the popular rap artist The Notorious B.I.G. The album was known as 'The Biggie Duets.'

In the following years, Scarface kept on pursuing his solo career and released three solo albums viz. 'Balls and My Word,' 'My Homies Part 2' and 'Made.' He also released a critically acclaimed record 'Emeritus' under the label 'Rap-a-Lot Record.' Scarface, the favorite rapper of the generation, also collaborated with various other artists like Eminem, Drake, John Legend, Ice Cube, Freeway, Tech N9ne and many more.

Scarface was also seen in the film 'Idiocracy' and appeared in 3D wrestling computer games 'Def Jam Vendetta' and 'Def Jam: Fight for NY.' On April 21, 2015, the rapper published his autobiography 'Diary of a Madman' which revealed details about his childhood and his musical journey.

The critically acclaimed album 'The Last of a Dying Breed' earned Scarface the title of 'Lyricist of the Year' at the 2001 Source Awards.

His association with legendary Tupac Shankar bore fruits when their album 'Untouchable' was declared as a Platinum Record by 'Recording Industry Association of America.'

Scarface also bagged the I Am Hip Hop award at the 2015 BET Hip Hop Awards.

Scarface is married to Melissa Lollis and has an autistic son named Brad Jordan. He faced arrest in the years 2010 and 2015 for failing to pay child support. He has battled depression for several years during his childhood days. He was diagnosed with bipolar disorder and had committed several suicide attempts during his youth.