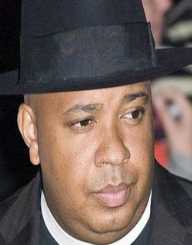 Joseph ‘Reverend Run’ Simmons was born on November 14, 1964. He is an American Musician. He is also a rapper and an actor. He is also known as Run, Rev. Run or Dj Run. He is renowned for being one of the founding members of the Run-D.M.C hip hop group. He is currently a minister in practice. He is presently Fifty three years old.

Joseph ‘Reverend Run’ Simmons was born Joseph Ward Simmons on November 14, 1964, in Hollis in Queens, New York, United States. He was brought up alongside to siblings including Danny Simmons and Def Jam Record’s co-founder Russell Simmons.

Joseph Simmons started his career journey by being a lead vocalist in The Force hip-hop group. He later alongside Darryl ‘D.M.C’ McDaniels and the late Dj Jason ‘Jam-Master Jay’ Mizell founded the Run-D.M.C as a lead vocalist. He was later ordained Pentecostal Minister by his spiritual mentor E. Bernard Jordan. He later started using ‘Rev. Run’ as his stage name. In 2002, he appeared in ‘The Weakest Link’ which was a special Rap Stars edition.

In 2004, Joseph Simmons was named the Protégé of the Year Award by Jordan. In 2005, he released his single ‘Song 4 Lovers’ his first using his stage name Rev. Run. He later released ‘Distortion’ which was his first solo album. In 2005, he started appearing in ‘Run’s House’ which is an MTV reality show series, he appeared until 2009.

In 2007, he alongside his son appeared in ‘My Super Sweet 16’. He was later honored as a BMI Icon at the annual BMI Urban Awards. In 2011, he was a special guest in churches including Texas Bay Area Fellowship Church and Grapevine Fellowship Church. In 2014, his series ‘Rev. Run’s Renovation’ and ‘Rev. Run’s Sunday Suppers’ premiered.