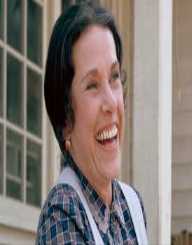 Katherine "Scottie" MacGregor was a comedic villain who starred Little House television series that was aired in the NBC in 1974. Her role as Harriet Oleson became career defining.

Katherine MacGregor was born in Glendale, California on 12th January 1925. Most of her childhood was spent in Colorado after her mother moved to Fort Collins.

She later went to the University of North Western. She was an active member of the drama club which helped in shaping her career.

After completing her degree in drama from Northwestern University, she moved the New York in 1949. She found her first job as a dance instructor in New York.

In the early 1950s, Katherine MacGregor made few appearances on Broadway in various states. Performing plays such as The Seven Year Itch and The Handful fire. Her first significant role in theatre came in 1954. She took a minor part in the film On the Waterfront. After her debut, she featured in several films.

Her popularity in Little House, one of the films she features, led to Macgregor getting an invitation to Madrid. In Spain, she was given a role in 625 Lineas program.

Katherine MacGregor later retired from screen production to focus more on local theatre. Apart from acting MacGregor, was involved in teaching kids at Wee Hollywood on Hindu religion. She retired in early 2000.

Katherine MacGregor married Bert Remsen in 1949 who was also an actor. Their marriage however ended in 1950. In 1969, she was engaged to Edward G.Kayer-Martina and parted ways one year later.

Katherine MacGregor opted out of acting after Little House; a series film she featured was canceled. She, however, never stopped doing what she loved. She began a theatre company for kids.