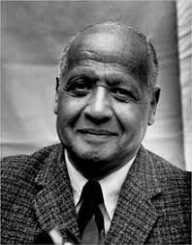 Roy DeCarava was an American artist and photographer.

Roy Rudolph DeCarava was born on December 9, 1919, in Harlem, New York City. His parents got a divorce, so he lived with his mother, Elfreda. As a child, he worked as a newspaper seller and a shoe cleaner.

Roy DeCarava enrolled at the Textile High School, graduating in 1938. He then won a scholarship for the Cooper Union Institute, where he studied sculpture and architecture. He left before graduating because he felt that the school discriminated against black students. He joined the George Washington Carver Art School, where he studied painting and printmaking.

Roy DeCarava first took a job as a sign painter. During World War II, he joined the U. S. Army and worked as a topographical draughtsman. After leaving the army, he worked as a commercial illustrator and painter. He then developed an interest in photography. He started taking photographs of the African Americans in his community. He held his first exhibits at the Forty-Fourth Street Gallery and the Countee Cullen Branch Library.

Over the years, he held several exhibits at the Museum of Modern Art. He also exhibited his work at the Whitney Museum of American Art and the Corcoran Gallery of Art. He became a photographer for magazines such as Newsweek, Fortune, Life, Time, and Sports Illustrated. In 1955, he founded the Photographer’s Gallery in his own home. In 1963, he founded the Kamoinge Workshop, an organization for black photographers.

Roy DeCarava's photographs were displayed on several album covers. They included Carlos Montoya’s Flamenco Fire, Mahalia Jackson’s Bless This House, and Miles Davis’ Porgy and Bess. From 1968 to 1975, he was an adjunct professor of photography at the Cooper Union Institute.

He then joined the faculty of Hunter College. He started as an associate professor and was eventually promoted to distinguished professor of art. He was a member of the Committee to End Discrimination Against Black Photographers. His works are currently on display in museums and galleries in New York City, Boston, Detroit, Portland, Philadelphia, and San Francisco.

Roy DeCarava received the Guggenheim Photography Fellowship in 1952 and the National Medal of Arts in 2006. He also won the Art Service Award, the Artistic and Cultural Achievement Award, and the Benin Creative Photography Award. He received doctorates from the Maryland Institute and the Rhode Island School of Design.