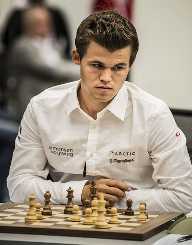 Chess Champion Magnus Carlsen was both on the 30 November 1990 in Tonsberg, Norway. His parents are Sigrun Oen and Henrik Albert Carlsen, and he has four siblings: Ingrid Carlsen, Signe Carlsen, and Ellen Oen Carlsen.

His father taught him to play chess when he was five, and at age nine Magnus Carlsen played in his first chess championships, the Norwegian Chess Championships. He then became a pupil of Simen Agdestein and played in numerous tournaments and events. At age 13, he became a Chess Grandmaster, one of the youngest ever to have achieved this at such a young age (2004).

At age sixteen, Magnus Carlsen was playing at tournaments competing against the best chess players the world. By 2010, he was ranked number one on the FIDE list. During 2012, Carlsen won the London Chess Championship for the third time. His rating increased to 2861, surpassing Kasparov’s world record. Carlsen went to beat Viswanathan Anand at the World Chess Championships in 2013 and was declared the World Champion.

In 2014, Magnus Carlsen successfully defended his title winning the World Rapid Championship and the World Blitz Championship. Thus, he became the holder of all three titles. His FIDE 2882 rate set a record. At the Sohn Conference in New York City in 2015, a blindfolded Carlsen played three chess games simultaneously and won. During 2016, his success continued when he beat Sergey Karjakin.

Magnus Carlsen is famous for his endgames, and many see him in the same league as Bobby Fischer, Jose Raul Capablanca, and Anatoly Karpov.

Magnus Carlsen was named one of the 100 Most Influential People in the World by Time Magazine, and Cosmopolitan magazines voted him one of the sexiest men in the world in 2013.

With his good looks and celebrity, Magnus Carlsen has appeared widely in the media including television shows such as Sixty Minutes. Carlsen modeled alongside actress Liv Tyler in 2010, showing G-Star Raw’s Autumn/Winter collection. He has also appeared in numerous ad campaigns including one for Porsche. He appeared as a character on The Simpson's, remotely mentoring Homer Simpson’s hidden talents as a chess master via Skype.

A successful documentary has been made about his life: MAGNUS it was launched at the Tribeca Film Festival in 2016 and has since sold well.

He owns a company Play Magnus AS. The company has produced a chess app which is suitable for beginners as well as experienced chess players.

Magnus Carlsen is honorary chairman of America's Foundation for Chess.