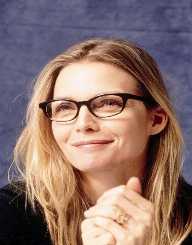 We have seen her walking speedily around Gotham City, we’ve seen her sing, and we have of course seen her taking the role of a Drug Lord’s Trophy wife. She is more than destined to change her characters from ‘Dangerous Liaisons’ to ‘Dangerous Minds.' She will even get more unpredictable with ‘The Family’ acting film. Robert De Niro, an American actor, will as well puff up in the movie. Overall, Michelle Pfeiffer is a film, movie and television actress.

On April 29th, 1958, Michelle M. Pfeiffer was born in California, Santa Ana, United States. Her mother, Donna is an excellent homemaker. Her father; Richard Pfeiffer is competent when it comes to heating and air conditioning diagnosis. She is the eldest sister of two girls and an older brother. In 1976, Pfeiffer graduated from the Fountain Valley High School. She later went to Golden West College for one year where she studied legal proceedings and speech transcriptions.

Michelle Pfeiffer looks like an elegant and sweet-talking blonde lady, don’t judge her by her cover. If you try to make a witty joke of her French, she will shatter your confidence. For the last two decades, Michelle’s presence has been seen in both small and big screen. But there are still significant facts you probably didn’t know about her.

For instance, she once worked as a penchant for oil painting. In her teenage years, Pfeiffer once worked at Vons Supermarket as a check-out girl. As stated earlier, she also wanted to be a court stenographer.

In 1978 she joined the Miss Orange County beauty pageant partition and won in the Miss California pageant. Even then she wasn’t stimulated by both. Later on, Pfeiffer opted to act, and that was it.The only thing she will never come to forget is how she learned to tie the Maraschino Cherries in knots with her tongue. I know it’s quite a handy skill.

From 1990 to 1999 Michelle Pfeiffer had a chance to appear six times on The People's Magazine's list. She was on the first cover of ‘Most Beautiful People in The World’. Her acting career began when he played in ‘Fantasy Island,' ‘Bad Cats’ and ‘Delta House’ in the early 70s.

In 1980, Pfeiffer landed a small role in the ‘Fall in Love Again’ film. Susannah York also starred in the movie. In 1981 she played ‘The Hollywood Knights’ and ‘The Curse of The Dragon Queen.' From 1983 to 1987 she landed several roles in ‘Into the Night’ and ‘Lady Hawke.'

Pfeiffer once partnered with Michael Caine and played in the ‘Sweet Liberty’ in 1986. In 1987, she became the talk of the big box office, all thanks to ‘The Witches of Eastwick’ film. She earned her first Golden Global Award nominee in 1988, and other prominent achievements followed.

During her teenage years, Michelle Pfeiffer admitted having been involved with denomination movements. She found herself abstaining from eating and drinking. According to the cult, she was joined in; they believed that a human body system could work efficiently without water and food.

This happened in her 20s when she arrived in Los Angeles in search of her destiny. She was put on a doubtful diet. In short, the theory believed in vegetarianism. They did help her to stop smoking and drinking, but she was quite drained off emotionally, physically and financially.

While in her Beverly Acting classes one of her closest buddy; Peter Horton helped her to leave the faction. Both came to know each other as loving mates, and they got married in 1981. Unfortunately, they divorced in 1990.

Pfeiffer then met with Fisher Stevens and the relationship lasted for three years. In 1993, she was set up on a blind date with David E. Kelley, and she married him the same year. In 1994, she adopted a baby girl called Claudia Rose. She later gave birth to a baby son named John Henry. Pfeiffer is now a full vegetarian.