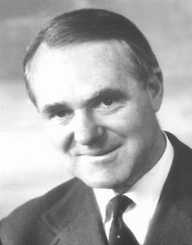 Elias James Corey is an American organic chemist who won the Nobel Prize in Chemistry 1990. Born on July 12, 1928, Corey receives the prize "for his development of the theory and methodology of organic synthesis" specifically retrosynthetic analysis. Corey through his research works has developed several synthetic reagents, methodologies, and synthesis. Considered as one of the greatest chemist alive, he has significantly improved on the science of organic synthesis.

Elias James Corey was born on July 12, 1928, in Methuen, Massachusetts to a Christian immigrant family. His father died eighteen months after his birth. Corey has sisters and a brother. Growing up, Corey had a great interest in sporting activities like football, baseball and loved hiking. Corey started his education at a Catholic elementary school and continued at Lawrence High School in Lawrence, Massachusetts. In 1944, Corey enrolled at the Massachusetts Institute of Technology to pursue an engineering course. Prior to entering MIT, Corey had no experience in the field of science with the exception of mathematics.

During his second year, he had his first lesson and chemistry, and that was when he gained interest in the field. Corey, therefore, changed his course of studied and graduated with a bachelor degree in chemistry in 1948. In 1951, Corey received his Ph.D. under the supervision of John C. Sheehan.

Elias James Corey gained an appointment at the University of Illinois, Urbana-Champaign after receiving his Ph.D. In 1952, he was admitted as a member of the Zeta Chapter of Alpha Chi Sigma at the University. Corey became a full professor of chemistry in 1956. Corey moved to Harvard University in 1959 and has since remained there, currently serving as an emeritus professor of organic chemistry. Corey has instituted an active Corey Group research program. Corey decided to work in the field of organic chemistry due to "its intrinsic beauty and its great relevance to human health." Elias James Corey has for more than five decades served as an advisor to Pfizer.

Corey worked on numerous synthetic reagents including the PCC (pyridinium chlorochromate) also known as Corey-Suggs reagents, which is mostly used in the oxidation of alcohols to corresponding ketones and aldehydes. Second reagents are the alcohol-protecting groups, t-Butyldimethylsilyl ether, triisopropylsilyl ether (TIPS), and methoxyethoxymethyl (MEM), which. They help in the synthesis of many natural products without functional group compatibility to sustain standard chemical transformation. In 1965, Corey also pioneered the reagent, Dithianes, which he used as a temporal modification of a carbonyl group in the displacement and addition reactions.

Corey with his group has developed several reactions used in modern synthetic organic chemistry. About 302 methods have been developed at the Corey lab since 1950 of which many have been named after him. Some of these methodologies include the Corey-Itsumo reduction, Corey-Fuchs alkyne synthesis, the Corey-Kim oxidation, Corey-Winter olefination, CBS enantioselective Diel-Alder reaction, Corey-Nicolaou mecrolactonization and Johnson-Corey-Chaykovsky reaction among several others. In synthesis, Corey and his group has worked on numerous total syntheses and have synthesized about 265 molecules since 1950.

Corey has published more than 1100 works in his career. These publications are mostly used as references by other researchers, and in 2002, the American Chemical Society (ACS) regarded him as the “Most Cited Author in Chemistry.” He was awarded the ACS Publications Division’s "Cycle of Excellence High Impact Contributor Award" in 2007. Some of his publications include Enantioselective Chemical Synthesis: Methods, Logic, and Practice with Laszlo Kurti, The Logic of Chemical Synthesis. Wiley-Interscience with Xue-Min Cheng, Molecules and Medicine John with Barbara Czako, Name reactions in heterocyclic chemistry and Name reactions for functional group transformations among others.

Elias James Corey has received several awards for his works including the Linus Pauling Award, Franklin Medal, Wolf Prize in Chemistry, National Medal of Science, Japan Prize, Nobel Prize in Chemistry, 1990, Roger Adams Award, and the Priestley Medal. In 1998, Corey was inducted into the Alpha Chi Sigma Hall of Fame and has several honorary degrees from institutions like Cambridge University, Oxford University, and National Chung Cheng University among several others. The E.J. Corey Institute of Biomedical Research (CIBR) was inaugurated in Jiangyin, Jiangsu Province, China in 2013. He is an elected Foreign Member of the Royal Society (ForMemRS) since 1998.