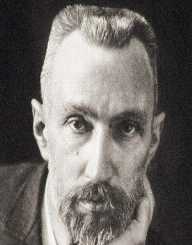 Henri Becquerel was born on December 15, 1852. He was a French physicist. He was the first person to discover the evidence of radioactivity. He was born into a family of scholars and scientists. He was interested in science from a young age because he was surrounded by scientists. Both his father and grandfather were scientists. In 1903, he won a Nobel Prize in Physics for his research in the field of radioactivity. The SI unit for radioactivity is named after him, that is, the Becquerel (Bq). He died on August 25, 1908.

Henri Becquerel was born on December 15, 1852, in Paris, France. He was born to Alexander Edmond Becquerel who was a scientist and Aurelie Quenard. He was born into a family of scientists. His family had produced four generations of scientists. His father was not only a scientist, but he was employed as a professor of Applied Physics. He attended the Lycee Louis-Grand in Paris. He showed an interest in science when he was a student. In 1872, he joined the Ecole Polytechnique which was a premier French government institution. He entered the institution to study engineering, and he graduated in 1874. In the same year, he joined the Ecole des Pontes at Claussees for a course in engineering. In 1877, he was awarded a degree.

After graduation, he was appointed as an engineer by the Department of Bridges and Highways of the French Government. Henri Becquerel worked at the same time conducted his own scientific research. In 1876, he was appointed as a junior teacher at the Ecole Polytechnique. In the years later he became the chair of the physics department at the institute. He also became involved in the National Museum of Natural History in Paris where he helped his father. His father was the head of physics at the Museum.

In 1892, Henri Becquerel became the physics chair of the Museum. He was involved in extensive research on the subject of infrared radiation. Infrared radiation is the process of how light is absorbed. He also researched the effect of infrared on phosphorescent crystals. His findings while researching led him to become a member of the Academie des Sciences in the year 1889.

In 1896, Henri Becquerel conducted thorough research on radioactivity and performed many experiments related to radioactivity. He discovered new radioactive materials other than uranium. The new radioactive elements included thorium, radium, and polonium. He won a Nobel Prize together with Marie Sklodowska-Curie and Pierre Curie in physics in the year 1903.

In 1900, Henri Becquerel was awarded the Rumford Medal for his discoveries in radiation proceeding from Uranium. The award was presented to him by The Royal Society. The following year he was awarded the Helmholtz Medal by the Berling-Brandenburg Academy of Sciences and Humanities. In 1903, he won the Nobel Prize in Physics. In 1905, Columbia University awarded him the Barnard Medal for Meritorious Service to science. In 1908, he was elected Permanent Secretary of the Academie des Sciences. In the same year, he was also elected a Foreign Member of The Royal Society. The SI unit for radioactivity, Becquerel (Bq) is named after him.

Henri Becquerel married Janin with whom he had one child, a son by the name Jean Becquerel. His son went on to become a scientist just like his father, grandfather, and great-grandfather. The family has produced so many scientists who have brought a difference in the true meaning and understanding of what science is today. He is among the scientist who is recognized in the history of scientists has contributed a lot in the field of Physics and science as a whole.

Henri Becquerel died on August 25, 1908, in Le Croisic. He was fifty-five years old when he died.