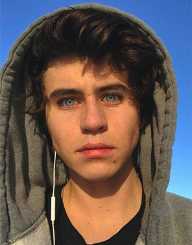 Hamilton Nash Grier was born on December 28, 1997, in Greensboro, North Carolina, USA. His parents are Elizabeth and Chad Grier. His stepfather is John Floyd. He has two brothers, William and Hayes. Hayes is also an internet teen sensation. He also has a half-sister named Skylynn, who often appears in his videos. He later started to go by his middle name Nash.

Nash Grier first joined YouTube in 2013. His fans loved his videos, thinking he was hilarious. Soon, he was gaining almost 100,000 followers on the website every week. As of 2017, his Youtube account has almost 5,000,000 subscribers. Most of his videos on the site are comedy videos, tips for becoming famous online, and video editing tutorials.

As well as being a famous star on YouTube, Nash Grier is also a hit on the social media app, Vine. On this app, people can record videos of themselves doing basically whatever they want-- as long as it is only six seconds long. While this may not seem like a lot of time, Nash Grier has been able to make many hilarious videos in this length of time that his fans love. His fame on the app has brought in other Viners to work on videos with him. Some of the famous Viners Grier has made videos with include Jerome Jarre, Carter Reynolds, and Robby Ayala. Currently, he has about 12,000,000 fans on Vine.

In 2015, Nash Grier took himself away from his computer camera and went to work on the big screen. The first film he was in was Janoskains: Untold and Untrue. In the same year, he also had a voice acting role in the movie Air Bound. One of his greatest film accomplishments to date was his role in the film The Outfield. In this movie, he worked with another internet sensation, Cameron Dallas.

Nash Grier was named One of the Most Influential People on the Internet by TIME magazine.

Throughout his time on his various social media platforms, Nash Grier’s fame has taken some hits, but it is only because of Grier’s own actions on the camera that made this happen. In recent years, Nash Grier has been accused of being a racist, as he has said a racist comment during one of his videos. He has also been accused of being homophobic and sexist for similar comments he has made. He now uses the hashtag #Notracist in many as tags on many of his videos to try to prove that he is not a racist, although some of his comments and actions still prove otherwise. Some of his videos also have sexist topics. In one video he tries to give teenage girls tips on how to better attract men. Some teens support these videos, while others give him the negative comments he deserves. Nash Grier has since apologized for his sexist videos and racist and homophobic slurs. However, his apology did not gain back many fans. If he does not truly change, his Internet career could be over faster than it began.

In 2015, Nash Grier began to date Taylor Giavasis. As of 2017, the young couple is still together.