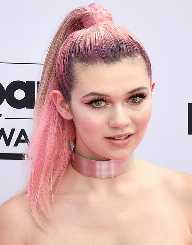 Jessie Paege was born on March 12, 1999, in New Jersey. She has a younger brother named Matt. She began her rising career when she was 14 years old. Paege created a YouTube cannel and began posting videos on it. Her main motivation behind posting videos on YouTube was to overcome her social anxiety. Through the video platform, she got to know and met her fellow YouTuber Bethany Mota and found out that she also used to suffer from social anxiety.

Paege started posting videos and within three years acquired a fan base with over one million viewers. Her videos are mostly about fashion and Do-It-Yourself projects, but they always have an original twist. She also often talks about her feelings on various topics and inspires her viewers to be more confident and overcome their fears.

In 2016, Paege overcame her fear of public speaking, when she began performing together with other YouTube stars. The Girls Night Tour also hosted YouTubers Alyson Stoner, Niki & Gabi, and Alisha Marie.  After gaining widespread recognition, Paege caught the attention of several media recruiters. She was cast in the television series Guidance and AwesomenessTV. In 2016, she was featured in the Nation-Alist Magazine.