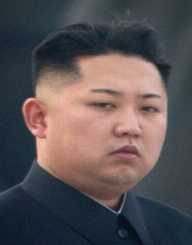 Kim Jong-un was educated in Switzerland but spent non-school time back home in North Korea. After completing his education abroad, he attended the Kim Il-sung Military University in Pyongyang.

His father Kim Jong-il (1941-2011) was preparing his son for taking over the leadership of the country when he died on the 17 December 2011. Upon his father’s death, Kim Jong-un was declared his successor, and by April 2012 he was named the head of the army, state, and party.

Kim Jong-un made his first public speech when the country celebrated the 100th anniversary of the birth of Kim II-sung on 15 April 2012. In the speech, he paid homage to the military first doctrine of his country and promised that the days when his nation could be threatened were over.

Kim Jong-un was appointed a marshal, the highest military rank, when the chief of the Army Ri Yong-ho was removed from his post. International reaction has been mixed, and there has been concern about North Korea’s nuclear programme and rocket testing. North Korea announced a third nuclear test in early 2013, and the UN Security Council implemented sanctions. By April that year, North Korea withdrew from the Kaesong Industrial Zone which had been run with South Korea. Later, in September, the zone was reopened.

North Korea announced in January 2016 that it had carried out a successful underground hydrogen bomb test and this led to international concern that the country had a much more advanced nuclear capability than it was believed to have had.

The international community was concerned when Kim Jong-un’s uncle, Mr. Chang who was vice-chairman of the National Defence Commission, was executed. The leader spoke of the execution on the 1 January 2014 when he referred to the elimination of factionalist filth.

In February 2017 Kim Jong-Nam, half-brother of the North Korean leader, died at Kuala Lumpur International Airport. He was being targeted with the nerve gas VX.

The state media announced in July 2012 that Kim Jong-un was married to Comrade Ri Sol-Ju. It is believed that the couple has a daughter.