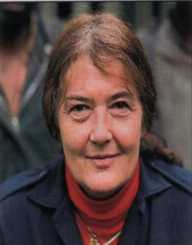 American zoologist and conservationist Dian Fossey was born on the 16 January 1932 in San Francisco, California. Her father was George Fossey who worked as an insurance agent, and her mother was Kathryn Kidd.

When Fossey was a child, her parents divorced, and Richard Price subsequently became her stepfather. From a young age, she showed a love of animals and began horseback riding at age 6.

Dian Fossey studied business at Marin Junior College. On her summer break following her freshman year, she worked on a ranch in Montana. Her experience working with animals in Montana made her decide to enroll as a pre-veterinary student at the University of California.

Finding the course challenging, she transferred to San Jose State College and took a degree in occupational therapy (1954). Fossey returned to studying and in 1970, started doing a Ph.D. at the University of Cambridge. She was awarded a doctorate in Zoology in 1976.

Dian Fossey worked as an intern in California before relocating to Louisville, Kentucky where she was appointed the director of the occupational therapy department at Kosair Crippled Children Hospital. Working in Kentucky, she was exposed to animals, and around the same time, a friend returned from Africa with photographs of African wildlife.

In 1963, Fossey made her first visit to Africa where she visited Kenya, Tanzania, Congo, and Zimbabwe. Her tour guide was a British hunter, John Alexander. They visited Lake Manyara, the Ngorongoro Crater, Olduvai Gorge, and Mt, Mikeno. Olduvai Gorge in Tanzania was there Louis, and Mary Leakey had their archaeological dig. Mt Mikeno in the Congo is where American zoologist Dr. George Schaller had carried out a pioneering study of the mountain gorilla in 1959.

Leakey spoke to Fossey about the work Jane Goodall was doing with chimpanzees in Tanzania and shared his ideas about the necessity to do long-term field studies of the great apes. Fossey spent time at Olduvai Gorge with Leakey showing her around recently excavated sites.

Dian Fossey saw her first mountain gorillas in October when she was taken by Alan and Joan Root, two wildlife photographers, into a forest in the Virunga Mountains. Fossey was able to observe and photograph the mountain gorillas and determined to return and study them.

Returning home to Kentucky, Fossey published articles and photographs of her trip. When Leakey visited Louisville in 1966, Fossey showed him her articles and photos. Leakey encouraged Fossey to head a long-term field project to study gorillas in Africa.

Dian Fossey secured the funding and in December 1966, arrived in Nairobi, Kenya. She acquired an old Land Rover and left for the Congo, stopping on her way to meet Jane Goodall at the Gombe Stream Research Centre.

Once Fossey began working with the mountain gorillas, she discovered that by mimicking their actions and sounds, acting submissively and eating the local celery plant, helped with acceptance from the gorillas.

She later wrote that her work as an occupational therapist had helped her formulate a plan or gaining the gorillas' trust. In 1967, Fossey and her workers were evicted from the camp, and she spent a fortnight locked up at Rumangabo. She moved her research camp to the foothills of Mount Bisoke and established the Kariskoe Research Centre (1967) where she began studying the Karisoke area gorillas.

Poaching was a major problem in the area and after Digit, one of the mountain gorillas she was researching, was killed in 1978 by poaches, she set up the Digit Fund to help combat poaching. Her work helped authorities identify and jail some poachers. Fossey became increasingly critical of tourism as she felt that the gorillas would be exposed to human diseases.

Dian Fossey also felt that tourism would interfere with how gorillas acted in their natural environment. Some of her detractors accused her of mental instability.
In current times, the Dian Fossey Gorilla Fund International believes that tourism helps provide a sustainable local community which in turn protects the gorillas and their natural habitat.

The Dian Fossey Gorilla Fund International focuses on the protection, study, and conservations of gorillas and their habitats throughout Africa. Farley Mowat wrote a biography: Fossey, Woman in the Mists (1987).

Dian Fossey was engaged to Alexis Forrester for a time. She later had a relationship with Bob Campbell, a National Geographic photographer who went on assignment to Karisoke. Fossey was murdered on the 26 December 1985 in her cabin in Rwanda. She was the victim of a machete attack. No valuables were taken.

She was 54 years old. Fossey was buried at Karisoke. A will was found bequeathing her estate to the Digit Fund and omitting her family. As the will was unsigned, Fossey’s mother Hazel Price successfully challenged the will.

The Supreme Court awarded the estate to Hazel Price. The estate included royalties from the Fossey’s book Gorillas in the Mist (1983). The book was adapted for film with Sigourney Weaver as Dian Fossey and won five Academy Awards.

Dian Fossey's staff were arrested after her death including a tracker Emmanuel Rwelekana, who had been fired for trying to kill Fossey with a machete. The team was released without charge, but Rwelekana died in prison, from an apparent suicide by hanging. American Wayne McGuire was accused by the Rwandan authorities of Fossey’s murder.

He was tried and convicted in absentia; the authorities case rested on the belief that McGuire was intent on stealing the manuscript of the sequel to Gorillas in the Mist (1983). No extradition treaty exists between Rwanda and the United States, and McGuire’s sentence was never enforced.