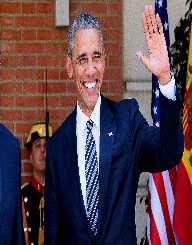 Barack Hussein Obama, Jr. was born on 4th August 1961 to Barack Obama, Sr. and Ann Dunham. His parents separated whilst he was a toddler, and Obama was looked after for several years by his mother’s grandparents. This was due to his mother still being a student when she gave birth to Obama, and she went on to finish her studies while Obama was cared for by his grandparents.

After Obama’s parents separated, his father returned to Kenya and re-married. He came to Hawaii in 1971 to visit Obama, and it was the last time they saw each other as Obama’s dad died in a car accident some years later.

His mother met a graduate student from Indonesia at the University of Hawaii in 1963, and they married in 1965. He had to return to Indonesia in 1966 as his visa had expired, and soon after Obama and his mother moved over to Indonesia. Obama lived in Indonesia until the age of 10, when he returned to Hawaii and lived with his grandparents.

Barack Obama attended Punahou School which is a private school in Honolulu, preparing students for college. He graduated in 1979 and then moved to Los Angeles where he started studying at Occidental College, which is a liberal arts school.

Two years later, Obama transferred to Columbia College, Columbia University in New York, which meant another move for him. He graduated with a Bachelor of Arts Degree in 1983, majoring in Political Science.

In 1988, Obama enrolled at Harvard Law School and graduated in 1991. He graduated with honors. While he was at Harvard, Obama was the first black president of the Harvard Law Review.

With his schooling, Obama used scholarships and student loans to educate himself, proving very independent from an early age.

In 1996, Barack Obama successfully ran for the seat of Illinois State Senate as a Democrat. He won the seat and was re-elected in the next two elections, 1998 and 2002 so he was proving to be very popular.

2004 saw Obama decide that he was going to run for the U.S. Senate. He had a massive win in the primary election. His popularity continued to grow, and he became a senator in early 2005.

Being as ambitious as he was, Barack Obama decided in 2007 he would run for the presidency. He received the nomination of the Democratic Party as their candidate.

On November 4, 2008, Barack Obama made history by being the first black American to win a U.S. Presidential election. He was sworn in as the 44th President of the United States on January 20, 2009. He then went on to win a second term as president. His presidency finished in early 2017, and he had a massive 60% approval rate when he stepped down.

Barack Obama met Michelle Robinson in 1989. After dating for three years, they married in 1992. They have two daughters, Malia and Natasha.

Barack Obama works tirelessly for charity. There are far too many to mention that have received his support. Both Obama and his wife, Michelle, have donated hundreds of thousands of dollars to charity in recent years. He also donated the money he won as part of his Nobel Peace Prize.

Barack Obama authorized the military operation in May 2011 that led to the assassination of Osama bin Laden, leader of the Al Qaeda terrorist group. Bin Laden had evaded all attempts to be caught up until that time.

Whilst in office, Obama introduced several reforms across social and economic policy which made a noted difference to certain communities. In March 2010 he finally introduced the Patient Protection and Affordable Care Act which was a total overhaul of the health system in the United States. This had been one of Obama’s key election promises.

He also enabled LGB people to serve in the military openly.

Obama eventually restored relations with Cuba and was the first president since 1928 to visit Cuba whilst in office.

Barack Obama put several key pieces of legislation through which enable him to hold his head high upon leaving office.