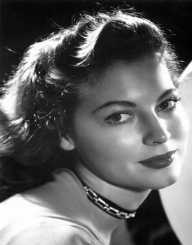 Ava Gardner is considered one of the best actresses of her time. Her beautiful looks charmed many on the screen and in real life.

This American actress was born as Ava Lavinia Gardner in North Carolina. Official records place her date of birth as December 24, 1922. She was the last born in the family of seven siblings. Her parents Jonas and Elizabeth Gardner came from the rural farming community.

Despite the poverty and the death of her father, Ava Gardner managed to graduate from rock Ridge high school. After leaving high school in 1939, she enrolled at a local secretarial college. She graduated from the Atlantic Christian College with secretarial skills.

Despite her famed acting life, Ava Gardner is an accidental entrant into the acting industry. Captivated with her good looks, Gardner’s brother in law Larry Tarr took photos of her.

A professional photographer, Tarr sent he photos to the scouts of Metro Goldwyn Myer, a movie production house in the US. At the age of 19 in 1942, Gardner got her first successful interview and joined the film industry. After several minor roles at MGM, Gardner found her fame at Universal studios.

With her charming looks, Ava Gardner managed to get major roles in numerous films as one of the most seductive actresses in the history of Hollywood. Her initial role in the movie The Killers made her an instant celebrity. The 1946 film opened other doors for her.

The 1950s were the most successful in her acting life. She featured in great films like Show Boat in 1951. The 1954 film the Barefoot Contessa was her major entry into the seductive role on the screen. She played Maria Vargas, a sexually alluring woman.

Ironically though, Ava Gardner was picked to play Sarah, the wife of patriarch Abraham, in the biblical film The Bible: In the Beginning. A film produced in 1966

The following decade was marked by major productions. During the 60s, Gardner was involved in films like Seven Days in May. This 1964 movie was based on the life of a former military officer turned political activist. The same year, Gardner appeared in another film The Night of the Iguana.

Although Ava Gardner was a Hollywood star, she also featured in television series. One of the important series was the Knots Landing. She was again in another 1986 television series The Long Hot Summer.

She continued to act in other film productions well into the 1980s.

Throughout her expansive spanning over 45 years, Gardner appeared in over 54 films and five television series.

The 1953 film Mogambo secured Ava Gardner an Oscar Award nomination place. This was for her role as supportive actress Kelly.

The Night of the Iguana, produced in 1964, won her multiple accolades. She got twin nominations from the British BAFTA and the Golden Globe Awards. Her ultimate prize came by winning the San Sebastian Prize for her role in the film.

Ava Gardener was a star in the film industry. Her marital life was marred by three unsuccessful marriages. She was first married to film actor Mike Rooney. The union lasted a year barely, from 1942 to 1943.

She then married musician Artie Shaw in 1945. They divorced a year later. Her third and last marriage was to music icon Frank Sinatra. They became a couple in 1951. The union lasted until they divorced in 1957. Unknown to many, Gardner was a heavy smoker and drinker. Her carefree life was entirely the opposite of her Baptist upbringing of her family in North Carolina.

Coming from a strict Christian setup, Ava Gardner was a self-proclaimed atheist in her adult life. Though not politically active, she was a convicted Democrat supporter.

After her long battle with lung complications and twin strokes, Ava Gardner eventually died in Westminster, London. Her death on January 25, 1990, due to pneumonia was met by shock by many of her admirers. Her remains were interred in Sunset Memorial Park. This was the burial site of her parents in North Carolina.

Ava Gardner was the rural poor girl who rose to a famous actor by chance. The introduction to acting by her brother in law changed her life together with her family. With fame came the lure of a carefree life. Her strong ethical childhood was eroded by her way of life in the film acting industry.

But her remarkable impact in Hollywood is still what most people remember to date.