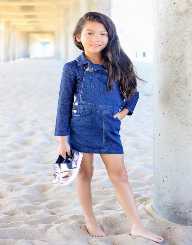 Txunamy was born on March 23, 2009, in California. Her social networking career began with the site musical.ly. She began with posting videos where she sang, did comedy sketches and lip syncing. Her musical.ly profile quickly reached over 2.5 million followers.

When Txunamy became famous on musical.ly, Txunamy’s mother created her Instagram account. The account opened in 2016 quickly became a major hit. She has around 700 thousand followers-one of the biggest number for a young star.

It has been estimated, that the young girl’s net worth is around $550 thousand. Her cuteness and politeness have attracted the attention of children and adults. The young entrepreneur established her brand and website, selling her T-Shirts, Sweat Shirts and Mobile phone covers.

Txunamy has collaborated on videos together with musical.ly stars Jacob Sartorius and Baby Ariel. However, her young age has caused several controversies. Many people have criticized her parent’s for allowing a child that young to be so exposed on the internet. Despite the negative allegations, Txunamy is happy about her rising career. She has been featured in such magazines as Vogue, Glamour and Hollywood Life.