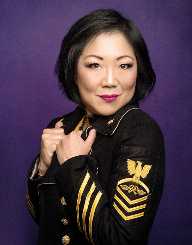 Margaret Cho was born on December 5, 1968, in San Francisco, California, USA. Her parents are Seung-Hoon and Young-Hie Cho.

Margaret Cho began practicing comedy when she was a teenager. Eventually, she auditioned to attend the San Francisco School of Arts for her high school years. While at this school, she began performing stand up comedy shows in venues around her hometown.

Margaret Cho’s acting career began in the early 1990’s. She first appeared on screen in the made-for-television movie Move the Crowd. She continued to work in small parts in movies and television shows until 1994 when Margaret Cho earned a recurring role in the show All American Girl. She played the character Margaret Kim for a season. After this, she resumed appearing in small roles on television shows and movies. Her works include Face/Off, Sweethearts, Ground Control, The Nanny, and Can’t Stop Dancing.

Throughout most of the 2000’s, Margaret Cho continued to work mostly in bit parts in movies and television shows like The Lost Room, ‘Til Death, Two Sisters, and Ghost Whisperer. In 2007, she took on her first recurring voice role as some characters in the animated show Rick & Steve the Happiest Gay Couple in All the World.

She would go on to work on this show until 2009. Later in the same year, she also took on the recurring role as the character Teri Lee in the show Drop Dead Diva.

Margaret Cho continued to act on Drop Dead Diva until 2014. In the 2010’s, she continued to work on various television shows and movies, including some animated roles. Some of her most recent projects include Tooken, Gay of Thrones, Hurricane Bianca, Family Guy, Sullivan & Son, and Sharknado 5: Global Swarming.

Outside of her scripted roles, Margaret Cho also has created some comedy specials. These include I’m the One that I Want, Drunk with Power, Assassin, Revolution, Notorious C.H.O., Beautiful, and Cho Dependent. Audio recordings of these shows are for sale on Cho’s website, with links to them on iTunes. Outside of her recorded comedy content, Cho has also gone on various comedy shows over the years.

Outside of acting and her stand-up, Margaret Cho has also written some books, mostly autobiographical with humor aspects. Her books are listed below.

I’m the One That I Want
I Have Chosen to Stay and Fight
Drunk with Power
Candide and Zadig
I Hate Boys
Live Sex Acts (written with Beth Lapides, David Cross, and Greg Fitzsimmons)

For much of her comedy career, Margaret Cho has slipped in-jokes about her experiences in the LGBT community in her stand up routines. Eventually, she came out as bisexual. Even though she was married to a man, she fought for the right of gay marriage. One gay marriage was legalized in the United States, in 2008, Margaret Cho was deputized to perform marriages in the city of San Francisco.

Over the course of her career, Margaret Cho has won some awards for her comedy, her acting, and for her political activism. Some of her most impressive awards are listed below.

Margaret Cho married Al Ridenour in 2003. However, this couple later divorced in 2015.