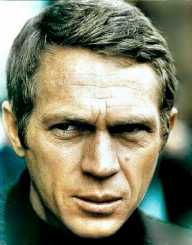 Steve McQueen (1930-1980) was an American actor who came to be known as “The King of Cool.” In spite of a difficult childhood, which had him involved in gang life and crime, he became a very successful actor. By 1974, he was the highest paid actor in the world.

Terence Steven McQueen was born in Beech Grove, Indiana on March 24, 1930. His father was a stunt pilot named Terence McQueen who left Steve’s mother six months after meeting her. Steve’s mother Julia Ann has been described as both an alcoholic and a prostitute. She was incapable of caring for him and left him with her parents when he was 3. Shortly after that, they moved to the farm his Uncle Claude. Steve was brought up with his Uncle Claude, who considered him as a son.

Throughout his childhood, his mother sent for him on different occasions but always ended up sending him away. When Steve McQueen was eight years old, he went to live with her and his stepfather in Indianapolis. His stepfather was abusive to such an extent that Steve turned to living in the streets by the time he was 9. He became involved with the local gangs, and his mother sent him back to his uncle. She again sent for him when Steve was 12. She was now in her third marriage, this time to a man who abused both her and Steve. Steve returned to his rebellious behavior and was sent to the farm again.

His last stay on the farm was short-lived, however. Steve McQueen left to join a circus when he was 14, and eventually returned to his mother’s house. His relationship with his step-father only grew worse as Steve continued his rebellious lifestyle. After a particularly severe beating in which Steve threatened to kill his stepfather if he laid hands on him again, Steve’s mother sent him to the California Junior Boys Republic in Chino. He stayed there until he was 16 years old. In his later years, Steve remained in contact with the Boys Republic. He went back several times to talk with and spend time with the boys, and also made donations.

Later on, in 1947, Steve joined the United States Marine Corps. He got in trouble several times due to his rebellious behavior, but he finally accepted the Marines’ discipline. He was honorably discharged in 1950.

After leaving the Marines, Steve McQueen went on to study acting in 1952 in New York Sanford Meisner’s Neighborhood Playhouse. He began performing on his first, small rolls in the early 50s, and then in 1955 got his first work on Broadway in the play A Hatful of Rain. Looking to become a Hollywood actor, he moved to California and began acting in B-movies. His first leading movie role was in the 1958 movie The Blob. In 1958, he was cast as the anti-hero Josh Randal in the Western TV series Wanted: Dead or Alive. This would become his first breakthrough role.

The TV series aired until 1961 and opened up new opportunities for him. In 1960, Steve McQueen starred in his first major hit, the movie The Magnificent Seven. He went on to play the lead in several other films, which further cemented his place as a Hollywood Star. In 1966 he starred in the movie The Sand Pebbles, a role which earned him his first and only Academy Award nomination.

In the early 70s, Steve McQueen starred in the movie Papillon, alongside Dustin Hoffman. Later, he appeared in The Towering Inferno (1974). By this time, he had become the highest-paid actor in Hollywood. Following this hit, he disappeared from the public eye for four years. He returned to acting in 1978, and his last films Tom Horn, and The Hunter were released in 1980.

Steve McQueen was romantically involved with several actresses and was married three times. His first wife was fellow actress Neile Adams, whom he married four months after meeting. They were wed in 1956 and had two kids: Terry Leslie McQueen (1959-1988), and Chad McQueen (1960). They have four grandchildren. Steve and Neile divorced in 1972. In spite of their divorce, McQueen and Neile remained friends, and occasionally lovers, for the rest of the actor’s life.

McQueen went on to date actress Ali MacGraw, whom he met while filming the movie The Getaway in the early 70s. They married in 1973 but divorced in 1978. McQueen’s last marriage was to model Barbara Minty, whom he married in 1980.

Steve McQueen was known for his drug use, which included marijuana, peyote, and cocaine. He was also a heavy smoker and sometimes abused alcohol. He was famous for sleeping around, and both his first and second wives have stated he was unfaithful on numerous occasions. Neile Adams, his first wife, described in an interview how he had physically abused her. She claims the actor’s insecurities stemmed from the abandonment he had felt during his childhood. McQueen was also known for being difficult to work with by his directors and fellow co-stars.

Although McQueen was raised Catholic, his last wife announced that he became an Evangelical Christian near the end of his life.

Apart from acting, racing was McQueen’s passion. He was very keen on it, racing on both motorcycles and race cars. He was an excellent driver and performed many of his stunts. McQueen owned many bikes and sports cars, as well as different aircraft, which he also piloted.

In 1979, Steve McQueen received a cancer diagnosis after developing a persistent cough that progressed into shortness of breath. He was informed he had malignant pleural mesothelioma, a cancer of poor prognosis which is associated with exposure to asbestos. He continued working in spite of it, and in 1980 was declared terminally ill.

Seeking alternative treatment, he travelled to Rosarito Beach, in Mexico. There, Dr. William Donald Kelley, who later had his license revoked, offered him an unconventional and highly controversial treatment. Kelley assured McQueen that he would be cured, even though doctors in the US had told him they could do no more for him.

Steve McQueen returned to the US three months later, where his condition worsened, and he developed tumors in his abdomen. Doctors warned him that the tumors were inoperable and that his heart would not withstand surgery. In spite of their warnings, McQueen checked himself into a small clinic in Ciudad Juarez, Mexico, using a fake identity. Twelve hours after surgery, in the early morning hours of November 7, 1980, he died of cardiac arrest. He was 50 years old. He was cremated, and his ashes scattered in the Pacific Ocean.

Steve McQueen has continued to be recognized as one of the most excellent actors in Hollywood and has remained very popular even after his death. Several songs have been written about him, including Sheryl Crowe’s song “Steve McQueen,” and Eytan Mirsky’s “(I Just Wanna Be) Your Steve McQueen.”

In 2007, Steve McQueen was declared one of the world’s highest-earning dead celebrities. He was also inducted in the Hall of Great Western Performers, and in the Motorcycle Hall of Fame. His rugged good looks earned him the 26th position in the list of “50 Sexiest Stars of All Time” by TV Guide in 2005. Finally, in 2012, the Asbestos Disease Awareness Organization gave him the Warren Zevon Tribute Award.