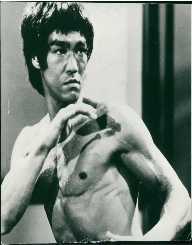 While they were touring San Francisco and Lee Hoi Chuen was performing among various Chinese communities settled in those areas, their fourth son was born in a Chinese Hospital in the Chinatown area of the City. As per the Chinese Zodiac Calendar, the date and time of Bruce Lee's birth were very auspicious, and it happened to be both the hour and the year of the dragon. Bruce Lee made his first appearance in an American film titled ‘Golden Gate Girl’ as a three-month-old infant in 1941.

Bruce Lee's family went back to Hong Kong during the early 1940s. At that time, Hong Kong was under Japanese invasion. His part-time actor and opera singer father introduced him to the showbiz at an early age. Bruce Lee's natural acting talent and his spontaneity in front of camera spurted his career as a child actor beginning from 1946. He acted in around 20 films until the time of his high school graduation. Though Bruce Lee grew up in a wealthy and prosperous environment largely due to his mother’s connection in Hong Kong, soon the area where they were staying became overpopulated as Chinese people inundated the then British Crown colony from the mainland China to evade the atrocities of the communist Chinese rulers.

As a result, the neighborhood where Bruce Lee was being raised became too perilous with frequent clashes between different antisocial groups becoming the order of the day. Eventually, Bruce Lee also became part of such a gang and started indulging in persistent street fights.

His parents realized that it was essential that Bruce Lee is equipped with proper knowledge and training of martial arts to survive such recurring incidents of street fights and introduced him to the fundamentals of Wu-style t'ai chi ch'uan, the second most popular form of martial arts in the world. In 1957, Bruce Lee started learning the technique of Wing Chun, a traditional southern Chinese Kung Fu, a form of martial art specializing in close range combat.

Bruce Lee attended Tak Sun School situated in 218, Nathan Road, Kowloon before joining the primary school section of the Catholic La Salle College. He was transferred to St. Francis Xavier's College to complete his high school graduation on account of his poor academic record as well as his poor conduct.

Meanwhile, Bruce Lee was increasingly getting involved in frequent street fighting, and when his father observed that Bruce Lee had antagonized an organized crime syndicate and there is an imminent threat to his life from them, he decided to send his son to the United States to pursue his further education in a safer and healthier environment.


Life in America And Career

Bruce Lee returned to the country where he was born 18 years ago. He initially lived in San Francisco with his older sister Agnes Lee for a few months before moving to Seattle, Washington in 1959 to stay with his family friends. He continued his high school education and graduated from Edison Technical School, Seattle, Washington.

He also worked simultaneously as a live-in waiter at a restaurant owned by the Chinese American restaurateur Ruby Chow. In 1961, he entered the University of Washington to study philosophy, dramatic arts, psychology and a host of other subjects. He received his philosophy (drama, in some other opinion) major from the University in due course.

While studying at the University, he started giving dance lessons and also worked as a waiter to support himself. He opened three coaching centers on the West Coast to impart training in martial arts and taught his newly developed fighting technique called “Jeet Kune Do” among his students.

Bruce Lee soon began appearing on the silver screen. He appeared in a television series called ‘The Green Hornet’ as Hornet’s assistant Kato, whose unique fighting style quite resembled the new fighting style that Lee used to teach in his martial arts training centers. After having appeared in some other television shows such as ‘Ironside’ and ‘Longstreet’ and a role in a film called ‘Marlowe’ (1969), Bruce Lee found a discriminatory practice in allocating film roles to Asian-Americans in Hollywood.

Already unhappy over the scarcity and quality of work available to him during the period, he had to supplement his income by giving private martial arts lesson to Hollywood celebrities including the likes of Steve McQueen. To add insult to injury, he received a notice for a scene of the film ‘Marlowe’, where he demolished an entire office through his karate and kickboxing moves. He finally moved back to Hong Kong in 1971 along with his wife, son, and daughter.

Upon arriving in Hong Kong, Bruce Lee signed a two-film contract. His first film ‘Tang Shan da Xiong’ was released all over Asia in 1971 and broke all box office records. The same film was released in the United States as ‘Fists of Fury’ and did exceedingly well.

His second film ‘Jing a wu man’ (1972) again broke his earlier box office record in Asia and was released as ‘Chinese Connection’ in the United States and achieved commercial success. After the stupendous success of both these two films, Bruce Lee co-founded his production company Concord Productions jointly with Raymond Chow. He embarked upon his first directorial venture ‘Return of the Dragon’ under the banner of his new production company.

Continuing with the dragon series, he made another film ‘Enter the Dragon’, his first major Hollywood project. Unfortunately, he died under sudden and mysterious circumstances one month before the premiere of ‘Enter the Dragon’.

Bruce Lee married Linda Emery, a fellow student at the University of Washington, on August 17, 1964. The couple was blessed with a son, Brandon (1965) and a daughter, Shannon (1969). They remain unseparated until Lee’s untimely and mysterious death. On July 20, 1973,

Bruce Lee died under strange and perplexing circumstances at his home in Kowloon Tong, Hong Kong. The official explanation of his sudden death was brain edema which was revealed by an autopsy and was reportedly caused due to an unusual reaction to a prescription painkiller he used to consume for a back injury.