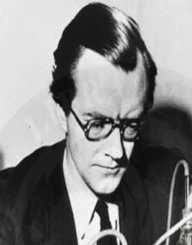 Maurice Hugh Frederick Wilkins was born on December 15, 1916. He was a British physicist and molecular biologist. He was also a Nobel Laureate as his work contributed significantly to the scientific understanding of isotope separation, X-ray diffraction and optical microscopy, development of radar and phosphorescence. He also worked on the structure of DNA at the King’s College in London.

Maurice Hugh Frederick Wilkins was born on December 15, 1916, in Pongaroa in New Zealand. He was born to Edgar Henry Wilkins who was a medical doctor and his wife. When he was six years old, his family moved to Birmingham in England. He attended Wylde Green College. In 1929, he joined King Edward’s School in Birmingham until 1934.

In 1935, he joined St. John’s College in Cambridge where he studied Natural Sciences Tripos and specialised in Physics. He graduated from the school with a Bachelor of Arts Degree. He later joined the University of Birmingham where he became a Ph.D. student under John Randall. In 1940, he received his Ph.D. based on the paper titled ‘Proceedings of the Royal Society on phosphorescence and Electron Traps’ which was published in 1945.

During the Second World Way, Maurice Wilkins played a significant role in developing improved radar screen at Birmingham. In 1944, he started working on isotope separation at the Manhattan Project which was at the University of California in Berkeley. He worked there until 1945. In 1945, he became an assistant lecturer in the Department of Physics at the University of St. Andrews. He later became an assistant director of a unit the dealt with biophysics at the Department of physics in King’s College in London. He worked under John Randall who had come up with the idea of the unit.

At King’s College, Maurice worked on X-ray diffraction on ram sperm and DNA. He was able to discover that it was possible to make thin threads from a concentrated DNA solution which consisted of highly ordered arrays of DNA which are suitable for the production patterns from X-ray diffraction. In 1951, he discovered that DNA in cells had a helical structure. In 1955, Maurice became the deputy director of the MRC Biophysics Unit at King’s College London. In 1970, he became the director of the unit, a post he held up to 1972.

In 1959, Maurice Wilkins became a Fellow of the Royal Society. The following year, he received the American Public Health Association’s Albert Lasker Award. In 1962, he became the Commander of the Order of the British Empire. In the same year, he received the Nobel Prize in Physiology or Medicine together with Watson and Crick for discovering the structure of DNA. In 1969, he founded the British Society for Social Responsibility in Science.

Maurice Wilkins married twice in his life. He first married Ruth with whom he had a son, Wilkins but they divorced later on. In 1959, he married his second wife Patricia Ann Chidgey with whom he had four children, Emily, William, Sarah, and George. In 2003, he published his autobiography titled ‘The Third Man of the Double Helix.’ He died on October 5, 2004, at the age of eighty seven.