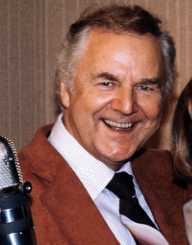 Dominick George “Don” Pardo was a prominent American radio and television announcer. Born on February 22, 1918, he spent 70 years of his career with NBC and best known for the show Saturday Night Live. He served as the announcer of the show from its start in 1975 until he died in 2014. Pardo was also the announcer during the early stages of favorite shows like The Price Is Right, NBC Nightly News, Jackpot, Jeopardy!, and Three in a Match among others.

“Don” Pardo was the first to break the news of the assassination of US President John F. Kennedy in Dallas, Texas to NBC viewers. He was one of the few people ever to receive a lifetime contract from NBC. In 2009, Pardo was inducted into the Rhode Island Radio Hall of Fame.

“Don” Pardo was born on February 22, 1918, in Westfield, Massachusetts, United States. He was born to Dominick and Viola Pardo both immigrants from Poland. His parents owned a bakery. Pardo grew up in Norwich, Connecticut and Providence, Rhode Island. He received education at Emerson College where he graduated in 1942.

“Don” Pardo began his radio career in 1938, with WJAR an affiliate of NBC in Providence, Rhode Island. In 1944, he was hired full-time by NBC as an announcer and would be with the network for the next 60 years. During his early days with NBC, he served as the announcer for programs like Barrie Craig, Confidential Investigator, and the science fiction shows Dimension X and X Minus One. He was a war reporter for NBC Radio during the World War II. He was among the rotating announcers on the KFOG San Francisco radio show "Ten at Ten," for 30 years.

After a successful career on radio, “Don” Pardo made it unto TV as the announcer of the RCA's and NBC's closed-circuit colour television demonstrations in the 1950s. Since then he announced several game shows including being the original voice of NBC’s The Price is Right from 1956 to 1963 when it was moved to ABC. From 1964 through 1975, he announced the show Jeopardy. He also announced NBC game shows like Three on a Match, Winning Streak, and Jackpot.

Pardo was the first to announce to NBC viewers of the shooting of President J.F Kennedy on November 22, 1963, in Dallas Texas. He was at the time the on-duty live announcer for WNCT-TV in New York and the NBC network. Pardo became well known as the announcer of the NBC television series Saturday Night Live from the shows first episode in 1975 until his death. He was involved in the recording of “I Beg Your Pardon” by the Canadian synthpop band Kon Kan. This piece became a hit throughout the world.

“Don” Pardo was featured in Weird AI Yankovic’s song “I Lost on Jeopardy," from his second album. He was also a participant in Frank Zappa’s musical performance in December 1976, where he recited a verse of the song “I’m the Slime” and did the narration for the song “The Illinois Enema."

Even in his nineties, “Don” Pardo continued to work on Saturday Night Live. He was recording his work for the comedy show at his residence at Arizona instead of the Studio 8H in New York. This arrangement later changed as he returned to Studio 8H. In 2013, Darrell Hammond had to replace Pardo in his SNL duties as a result of Pardo’s minor accident (he fell and broke his hip).