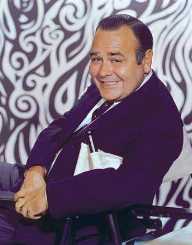 Jonathan Winters was one of the greatest comedians ever to grace the face of the earth. He did stand-up, comedy, acting, writing and painting up until his demise in 2013 at Montecito, California. Jonathan was labeled the funniest man alive with 11 Grammy nominations to his name. The world mourned the death of a legend in comedy on April 11, 2013. Winters dedicated 60 years of his life to comedy, and he made sure that he released something new every decade.

Jonathan Winters was born on 11th November 1925 in Dayton, Ohio. His mother, Alice Kilgore was a radio personality while his father, Jonathan Harshman 11 worked as an insurance salesperson who later ventured into stock brokerage. His grandfather was the owner of the Winter Bank, which collapsed during the Great Depression.

Jonathan's childhood was not all rosy. At the age of seven, his parents separated because of his father's alcoholism, and he moved to Springfield to live with his grandmother and his mother.

School did not favor Jonathan as he was not a bright student. He was a loner, and the only way for him was to amuse himself was with imaginary interviews and funny sound effects that he made while at home.

Like any typical little boy, Jonathan had not forged his career path. He wanted to be a test pilot, a doctor and at some point a detective.

Jonathan loved to tell his life story to people. He would narrate it in a humorous way that left the listener in stitches.

Life went on for Jonathan, and he joined Springfield High School. His academic weakness did not improve, and in his senior year, he dropped out of school to join the US Marine Corps at the age of 17 years during World War II. He was 1.78 meters tall which made it easy for him to join the forces.

Jonathan was deployed to the South Pacific where he served for two years. He later returned to school and got his high school diploma.

Jonathan Winters had always been a master painter. He proceeded to join Kenyon College with the aim of pursuing fine arts. He later enrolled at Dayton Art Institute with the hope of better days in his slow art career.

Jonathan studied cartooning In Dayton where he met his future wife, Eileen Schauder.

Jonathan Winters, a family man by then, lost a wristwatch. His wife Eileen Winters pushed him to participate in the Arthur Godfrey's Talent Scouts talent contest. The winner would walk away with a brand new wristwatch.

Jonathan Winters won the contest and kick-started his career on Television.

Jonathan's first gig was on WING radio station as an early morning DJ in 1946. Jonathan landed his second job in 1950 while studying at Kenyon. He was then working at WBNS TV for little pay. Jonathan was ambitious, and when the Columbus TV failed to give him a raise, he resigned and left for New York.

He began a successful career in Blue Angel nightclub, and his popularity grew by the day. The 1954 talent show have Jonathan the exposure he desperately needed. He was on Broadway in no time. He also featured in ‘Chance of a Lifetime' as Jonny Winters. He continued to thrive in New York and featured on many talk shows.

In 1956, NBC opened their doors for Jonathan. He was able to host his show "The Jonathan Winter Show" which ran in 1956 and 1957 with six episodes.

Jonathan Winters's amazing gift was endearing to various TV hosts. Jack Paar featured Jonathan in his show between 1957 and 1962. Jonny Carson continued to have Jonathan on ‘Tonight Show' following the footsteps of his predecessor Jack Paar.

One of Jonathan Winter's memorable characters was Maude Fricket, a funny elderly lady with a sharp tongue. The Caucasian lady hosted the Scooby-Doo gang as they took a rest from ghost-hunting.

In the 70s, Jonathan concentrated on talk shows. He made an appearance on The Dean Martin Show, The Garry Moore Show, and The Steve Allen Show among others.

His Grammy award-winning album 'The Little Princess" put him on the Grammy winners' list as the Best Children Album.

Jonathan has lent his voice to numerous cartoon shows such as Little Dracula, The Christmas Carol, Peter and the Wolf and many others. He has featured in many movies and TV series. One of the memorable performances was in Mork and Mindy that premiered in 1978.

Jonathan Winters did a voice on the Utica Beer TV Commercial. His voice impersonation talent saw him impersonate the then President Kennedy as a prank in a mock interview by Jack Paar.

Jonathan Winters will be remembered for voicing Grandpa Smurf. Nine days before his demise, Jonathan Winters had just finished working on ‘The Smurfs 2'.The movie premiered on July 28, 2013, In his honor.

His 1994 role in ‘The Shadow' was greatly executed. Jonathan's supporting role in ‘Davis Rules' bagged him an Emmy Award.

Jonathan Winter's talent started attracting America's attention, and in 1960, he received a star on the Walk of Fame.

In 1963, his character in the hilarious show ‘It's a Mad, Mad, Mad, Mad World' earned him a Golden Globe Award. The Grammy's started streaming in after 11 Grammy Awards nominations, and he received his first Grammy in 1975.

In 1988, one of his books, 'Winters' Tales' became a best seller. In 1991, Jonathan received an Emmy Award for outstanding performance in Davis Rules. Jonathan' series of awards did not stop there. In 1996, he received his second Grammy Award for Crank(y) Calls in the best-spoken comedy category. The coveted Mark Twain Prize was awarded to Jonathan Winter in 1999.

In 2002, his guest role in the series' Life with Bonnie' earned him an Emmy Awards nomination. Robert Williams presented Jonathan with a Pioneer TV Land Award. His exemplary work in the comedy industry will never be forgotten.

Jonathan met Eileen while still in college and later married her. They were married for over 6o years until the sudden death of Eileen in 2009 from Breast Cancer. Jonathan and Eileen Winters had two children, Lucinda Winters and Jay Winters.

Jonathan and Eileen were grandparents to five grandchildren. He lived in Santa Barbara, where he met his death.

Jonathan Winter was diagnosed with Bipolar Disorder in his 30s at a psychiatric facility where he had committed himself.

Bipolar is a mental illness that causes extremity in moods, usually triggered by stress. One minute a person expresses great excitement, and in a minute, the person is deeply depressed. The treatments then were not very effective, and he had to learn to live with it.

This setback did not deter him from pursuing his passion. He was discharged after eight months, and as expected, he made jokes about his condition during his performances.

Ironically, he was called upon by Stanley Kramer o feature in ‘It's a Mad, Mad, Mad, Mad World' on the very day he was discharged from the hospital.

Jonathan Winters died naturally in his home at the age of 87 years.

Jonathan Winters painting when he was off the stage. He also enjoyed writing books about his art.