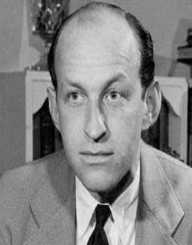 American playwright and author Garson Kanin was born on the 24 November 1912 in Rochester, New York to David Kanin and Sadie Levine. He had two siblings, a sister Ruth and a brother Michael. His father was a real estate developer, and his brother Michael became a screenwriter.

Garson Kanin did not graduate from high school but continued his education as an autodidact with many intellectual friends including Thornton Wilder and W. Somerset Maugham. He would joke that he went to Wilder University. He later studied drama at the American Academy of Dramatic Arts (1932-1933).

After Garson Kanin dropped out of high school during the Great Depression, he worked at Macy’s Department Store. He formed a band, Gar Kay and the Red Peppers and worked as a comedian. Kanin made his Broadway debut in a production of Little Ol’ Boy in 1933. He also performed regularly on radio and had a part in The Goldbergs. In 1935, he appeared in Ladies’ Money, a George Abbott production. Kanin then became Abbott’s assistant which involved directing road companies of Abbott’s shows as well as casting.

Garson Kanin appeared in Star Spangled (1936). Thornton Wilder attended the show and was introduced to Kanin, and the two of them became good friends. Kanin’s directorial debut was in 1936 with Hitch Your Wagon (1937). The success of the play led to Kanin becoming a production assistant n in Hollywood with Samuel Goldwyn. He was then employed at RKO Studios and directed his first film, A Man to Remember (1938). Other films were Bachelor Mother (1939),  My Favorite Wife (1940) and Tom, Dick, and Harry (1941). He directed eight films for RKO Studios.

Garson Kanin was called up to join the U.S. Army when during World War II (1939-1945). He was sent to Washington D.C. and was tasked with directing patriotic and training films. He then worked in the Office of Strategic Services in London. During this time he worked with Carol Reed on a documentary about the allied invasion entitled The True Glory.

Garson Kanin's first play after returning from World War II opened a the Lyceum Theatre on Broadway in February 1946 was Born Yesterday.  The show was a success and ran for four years, setting a record for the longest running play at the Lyceum Theatre. The same year, he directed Years Ago (1946), a Ruth Gordon play. He went on to write four screenplays with Gordon: A Double Life (1948), Adam’s Rib (1949) and Pat and Mike (1952).

Other plays from this phase included The Smile of the Word, Rat Race, and The Live Wire. As well as screen and playwriting and directing, Kanin was also a published writer.  He wrote six novels and numerous short stories as well as essays. His books included  Blow Up a Storm (1959), A Thousand Summers (1973), One Hell of an Actor (1978) and Moviola (1979),  He was also the author of  Remembering Mr. Maugham and Tracy and Hepburn: An Intimate Memoir. Plays Kanin directed on Broadway during the 1960s, included Sunday in New York with Robert Redford, A Gift of Time with Henry Fond and Funny Girl (1964) with Barbra Streisand.

His World War II documentary The True Glory won a 1945 Academy Award for Best Documentary. The National Board of Review also named True Glory the Best Film of 1945.