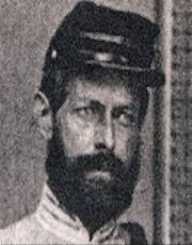 Henry Wirz was the commandant in charge of a prison camp located in Andersonville, Georgia during the American Civil War. He was tried and found guilty of neglecting the prisoners which led to a death sentence.

In 1845, Henry Wirz married his first wife, a woman named Emilie Oschwald who bore him two children. Their marriage ended in divorce when she refused to emigrate alongside him in 1853. He married a second time to Elizabeth Wolfe, a widow with two daughters and bore him a child named Cora in Louisiana.

Born in Zurich, Switzerland on November 25, 1823, as Heinrich Hartmann Wirz, he was the son of Sophie Barbara Philipp and Hans Caspar Wirz. As a child, he aspired to become a physician, but their limited budget refrained him for doing so. As a result, he became a merchant but ran into trouble when he was unable to return the money he borrowed in 1847. He had the option of a forcible emigration for 12 years which he took, leaving his wife and children behind.

He first found himself in Russia then moved to the United States wherein he settled in Lawrence, Massachusetts as a factory worker. He relocated to Kentucky in 1854 where he worked as a doctor’s assistant and attempted to establish his practice.

In 1861, Henry Wirz found himself in the midst of the American Civil War, and he was enlisted in Louisiana’s Infantry Unit. He was involved in 1862 Battle of Seven Pines which he claimed he was injured and was promoted to captain. Due to his injury, he was re-assigned to General John H. Winder.

In 1864, he was made commandant of a large military prison, Camp Sumter, which was located in Andersonville, Georgia. The camp held approximately 32,000 prisoners at its peak of which about 13,000 prisoners died due to poor conditions and malnutrition.

When the prison was liberated in 1865 by Union General William T. Sherman, Henry Wirz was arrested and held accountable for the deaths of the prisoners. He was put on trial, and the public was enraged of the event that occurred within the prison walls. He was charged with conspiracy and cruelty of which the trial ran for two months before he was found guilty of all charges.

Wirz was sentenced to death and was hanged on November 10, 1965, at the Old Capitol Prison located in Washington D.C. He was later buried on D.C.’s Mount Olivet Cemetery.

The night before his execution, it was believed that if he had implicated Jefferson Davis instead, his sentence would be commuted as told by Louis Schade, his attorney. Wirz refused which prompted his demise.