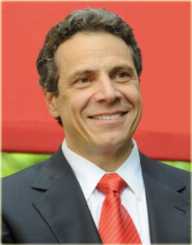 A New Yorker through and through, Andrew Cuomo’s life and career are intrinsically tied to the city where he was born. The current governor of New York, Cuomo is running for a third term as Governor in an election next November, where he will look to continue the Cuomo family’s legacy in the largest city in the USA.

As the name immediately suggests Andrew Cuomo roots are in Italy. His grandparents on both sides of the family came from Sicily and the south of the Italian mainland, moving to the United States to make a new life there.

Cuomo himself was born in Queens, New York to Mario and Matilda Cuomo. The family would later become very wealthy, but it was not always this way - great chunks of little Andrew’s childhood were spent in or near his grandmother’s store, in the area of Queens known as ‘Little Jamaica’ for the number of Caribbean-descended people living and working there. Cuomo by no means lived in poverty, but compared to the Queen's house he moved out of years later, which had no less than six bedrooms, it was certainly humble.

Cuomo studied law at universities in New York City itself and then moved quickly and naturally enough to work for his father. Mario Cuomo ran for the Governor’s office in 1982 on behalf of the Democratic Party, with Andrew serving as his campaign manager. The campaign, with Cuomo Senior battling it out against the Republican Party’s Ed Koch, was far from a foregone conclusion.

The Cuomo's pulled it off, however, and Andrew’s father was sworn into office after winning just over 50% of the vote. During Mario Cuomo’s tenure, Andrew acted as an advisor and consultant to his father, but not for cash, being paid a token dollar a year for his service.

Outside of politics, Cuomo worked for some years as a district attorney and also worked with a legal firm for some time. With a father in charge of the state of New York, however, politics was never far from his mind. In 1986 Cuomo founded an organization to help the city’s homeless population, called HELP (Housing Enterprise for the Less Privileged).

Cuomo led the organization for a couple of years, and then went into a policy role under New York City mayor David Dinkins - Cuomo chaired the New York City Homeless Commission, which was tasked with finding housing for homeless people and generally enacting policies to improve their livelihood.

On the strength of his work and his family’s status and connections within the Democratic Party, Cuomo was soon given his first major role in politics. After Bill Clinton’s election as US President in 1993, Cuomo was appointed Assistant Secretary for Community Planning and Development (he went on to become Secretary in 1996 after his boss was removed from office by an investigation).

In office Cuomo pursued various initiatives, most importantly pushing for an increase in the number of Americans owning their home, and negotiating with a major gun manufacturer, Smith, and Wesson, to implement design changes which would make their guns safer.

This term in office was not without controversy. When President Clinton appointed an Inspector General to look into Cuomo’s department and judge its performance, Cuomo and the Inspector General clashed both publicly and fiercely over the investigation’s findings. Besides this, Cuomo’s policy on home ownership (although well-meaning) led to accusations after the 2008 financial crisis. Cuomo’s critics argued his policy of encouraging banks to lend to less well off people contributed to the crisis, although others have since downplayed these allegations as politically motivated attacks.

Criticism or not, Cuomo remained ambitious. In 2002 Cuomo ran for the job he’d helped his father win thirty years previously, seeking the Democratic Party’s nomination to run for Governor of New York State.

It was quite a blow to sustain, but Cuomo picked himself up and kept going. In 2006 he successfully ran for Attorney General of New York, beating his Republican opponent with 58% of the vote. After this, his first personal election victory, he went to work and amongst other efforts led a corruption investigation against some New York officials.

Andrew Cuomo also won a lawsuit against a homeless charity which was diverting money away from the people it should have been helping. Things were looking up once more.

Riding on his successes as Attorney General, Cuomo was set for another go at the Governor’s office in 2010. He had grown so popular in New York that the Obama administration asked the incumbent Governor, a Democrat, to step aside so that Cuomo could run.

Cuomo won the ensuing election by a landslide, beating his opponent by over 30 points. The son had achieved what the father had - Andrew Cuomo was Governor of the State of New York.

Cuomo’s governorships (he won another term in office in 2014, lessening his share of the vote but still winning by 20 points) have received mixed reviews in a polarised America, and the history books are not concluded yet.

His policy achievements have made a mark on New York - amongst others; for instance, he kept campaign promises to introduce same-sex marriage and to increase control on the purchase and ownership of guns in the state. Ratings in recent months have been fairly split - more New Yorkers seem to like Cuomo than dislike him, but it’s a small margin.

An election in November 2018 will decide if Andrew Cuomo can serve as Govern for a third four-year term. The future is not clear; as for any politician in a democratic society, it all depends on the voters.